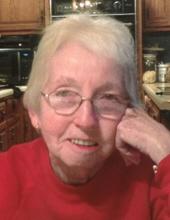 She was born August 20, 1939 to Lyle and Alma Swanson Huss in Cedar Rapids, Iowa. She was raised by her mother and step-father, Henry “Pete” Moyer.

Sandra “Sandy” graduated from Ottumwa High School in 1957. She was working at Kresge Department Store when in 1959 she was introduced to her future sailor husband, Darrell. They were both 1957 OHS graduates, but had never met each other. In 1960 after his return from Adak, Alaska, they were married on May 23rd. From this union they have three wonderful children, Scott of Cincinnati, Ohio, Shawn of Ottumwa and Sheryl (Terry) Steele of Ottumwa.

Sandy was a loyal loving wife who for seventeen years traveled from duty stations to new duty stations with her career husband. She did get to go to Rota, Spain when he was deployed there. While Darrell was on active duty, she worked at several different government jobs.

Upon his retirement, they returned to live and raise their children in Ottumwa. Both of them became members of Ottumwa High School Class of 1957 Reunion Committee. Together with others, they helped arrange eight reunions, five years apart.

In January 1996 they joined the Heartland Bootscooters where they met and danced with many wonderful people. Sandy was employed at Everco Corporation for over seventeen years until it closed.

She is preceded in death by her parents and brother Lyle Huss.

Limited open visitation for friends will be from 1 p.m. to 6 p.m. Thursday November 19th at Reece Funeral Home.

Her soul being saved, private funeral services will be held at First Church of the Open Bible with Pastor Mark Hornback officiating. Cremation will follow the service. For those not able to attend, you may watch the service live at 1 p.m. Friday November 20th from the Reece Funeral Home Facebook page.

Inurnment will be in Floris Cemetery at a later date.

She will be solely missed by her husband and family.