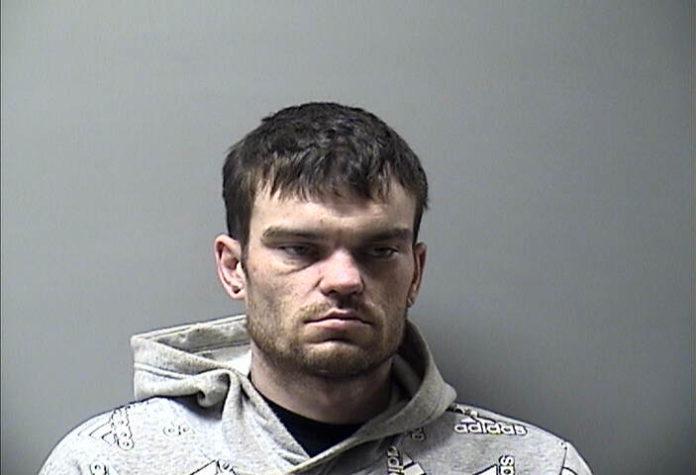 According to court documents, at around 1:31 a.m. on Wednesday, May 4, 31 year old Scott Lee Puffinbarger was driving near 1000 E. Main when he was stopped by an OPD officer for a rear license plate that was allegedly covered in dirt or dust and was completely illegible. The report states that a police K-9 indicated the presence of contraband. A probable cause search located a used hypodermic needle and syringe that allegedly field-tested positive for methamphetamine. It was also determined that Puffinbarger’s license was barred until July of 2025.

Upon further searching of the vehicle, a knife with a blade in excess of 9 inches was found concealed in the driver’s side door panel. In the front passenger seat police found a bag that contained a loaded .22 caliber Cobra Enterprise Model C22LR pistol, and directly behind the driver’s seat was a loaded and chambered .45 ACP Springfield Armory 1911 pistol. The incident report notes that Puffinbarger is a convicted felon; Iowa Courts Online shows felony convictions or guilty pleas for 3rd Degree Burglary, 1st Degree Burglary, and Escape From Custody. As a result of the convictions, he is prohibited from possessing firearms or other dangerous weapons.

Puffinbarger was arrested and charged with 2 counts of Possession Of A Firearm By A Felon (Class D Felony), Persons Ineligible To Carry Dangerous Weapons (Serious Misdemeanor), Driving While Barred (Aggravated Misdemeanor), and Possession Of Drug Paraphernalia (Simple Misdemeanor). He is currently in the Wapello County Jail on a $13,000 bond. A preliminary hearing is set for May 10 and Puffinbarger has filed for a court appointed attorney.