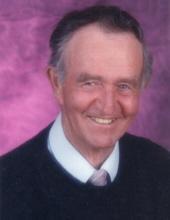 He was born June 5, 1932 to Willis and Edna Wimpsett Breon, south of Hedrick on the family farm where he lived most of his life. He attended Hedrick High School where he graduated in 1950.

Kenneth married Jacqueline Reno in 1951 and they moved to the farm south of Hedrick where he carried her over the threshold and they lived for 35 years. They later moved into town in 1986.

Besides his love of farming, Kenneth sang with the Wapello Chiefs, belonged to the Good Sams camping club, was a Wapello County 4-H leader for 10 years, served on the 4-H Extension Council, acted in several plays and drove a school bus.

Kenneth loved people and knew no strangers. His friends and family were the most important things to him. He was well-known for and will be remembered for his cheerful spirit and sense of humor. He was happiest sitting in the combine and being at the farm.

Surviving is his wife, Jackie; his children, Marlys Breon-Drish of Ottumwa, Bryan (Janet) Breon and Brad (Mary Beth) Breon both of Hedrick; 7 grandchildren, Bradyn, Baryd, Danielle, Amanda, Ashley, Staci and Brandon; 5 great-grandchildren; 3 brothers, Ervin (Ila) Breon and Ross Breon both of Hedrick and Max (Norine) Breon of Texas; and several nieces and nephews.
He was preceded in death by his parents, his sister and brother-in-law, Marjorie and Bob Meyer; sister-in-law, Janice Breon and nephew, Michael Breon.

His body has been cremated. Visitation with the family present to greet friends will be 5 p.m. to 7 p.m. Friday, October 15th at Reece Funeral Home. The family asks those attending to wear a mask.

Private graveside services and inurnment will be in McCormick Cemetery near Highland Center with Pastor Bill Hornback officiating.

Memorials may be made to Hedrick Christian Church or Carl Craft Civic Center.