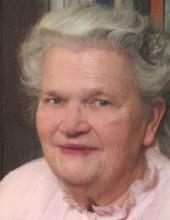 A graduate of Ottumwa High School, she attended Iowa Success School. She worked for Kiple and DePrenger Furniture Co., but most importantly was a homemaker.

She was a member of Church of Christ.

She was preceded in death by her parents, a son-in-law, Scott Coltrain; a daughter-in-law, Carrie Ward; and a brother, Donald Tillotson.

Limited open visitation for friends will be from 10 a.m. to 6 p.m. Tuesday, October 13th at Reece Funeral Home.