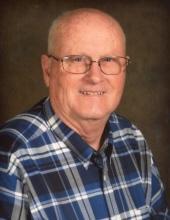 He was born September 14, 1936 in Brooklyn, IA to Donald Wilson and Jennie Louise Otto Parks. Bob married Sharon K. Copeland on January 12, 1976. They resided in Fremont until moving to Ottumwa in 2012.

Growing up in Brooklyn, Bob attended Brooklyn High School. Bob and his brother, Richard operated Dime Delivery in Oskaloosa. He worked for 38 years for Mahaska Bottling where he was known as “Pepsi Man”, delivering to local businesses, local special events, fairs, and race tracks in Oskaloosa, Eldon and Knoxville. He retired in 2000.
He loved racing, NASCAR, traveling, but most especially loved his family. Jeff Gordon was his favorite driver after Bob’s son, Lorne.

Limited open visitation will be from 10 a.m. to 3 p.m. Sunday, October 11th at Reece Funeral Home. His family will be present to greet friends from 3 p.m. to 5 p.m. Sunday. Those attending are asked to wear masks or an appropriate face covering and adhere to the current social distancing guidelines.