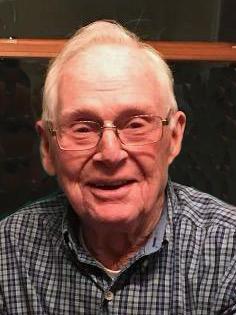 He was born on December 9th, 1928, near Selma, IA. He was the son of Wayne and Elsa Crawford. He grew up in Libertyville and graduated from Libertyville High School in 1947.

Delbert enlisted in the US Army in 1950 and served in active duty during the Korean Conflict. He was wounded in service and spent 18 months in the army hospital. He was awarded the Purple Heart and Bronze Star.

He married Mary Ann Drish on November 23, 1957, in Fairfield, IA. There he worked as a farmer while raising his family. He and Mary Ann later relocated to West Burlington.

Delbert was a lifetime member of the V.F.W and D.A.V. He helped form the Jefferson County rural water committee and served as a commissioner on the soil conservation committee. In 1973 he and his family were chosen as farm family of the year. Delbert was a loyal fan of the St. Louis Cardinals and youth sports, first the Fairfield Trojans and later the West Burlington Falcons.

He was preceded in by death by his parents, 1 sister, 2 brothers, and a son in law.

Family often joked about Delbert’s stubborn nature, but it was this that allowed him to continue deer hunting, playing pitch, having garage sales, hanging Christmas lights, going to the casino, and chasing great grandkids until the very end.

Visitation will be held Tuesday, August 2nd from 5:00-7:00. Funeral service will be Wednesday, August 3rd at 10:00 am, both at Behner Funeral Home in Fairfield, IA.  Burial with Military Honors will follow the service at Evergreen Cemetery, Fairfield.

In lieu of flowers, memorials have been established for Southeast Iowa Regional Hospice and the West Burlington Booster Club.