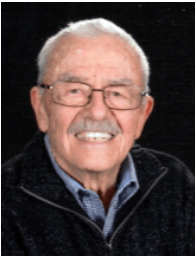 He was born March 10, 1932 in Pocahontas County, IA to Frank and Gladys Otteson Gottschalk. Dale married the love of his life, Joann Coppinger on January 10, 1953.

Dale was a graduate of Manson High School. He served in the US Army serving in the 2nd Infantry Combat Engineer Battalion during the Korean Conflict, earning a Purple Heart.

Dale served 3 years on the Soil Conservation Service, farmed near Ft. Dodge for 8 years and worked for Land O’ Lakes Felco for 2 years. He joined Kentucky Fried Chicken in 1966 and owned KFC in Ottumwa from 1966 until his retirement in 1999. Dale served as Mayor of Ottumwa from 1980 to 1981, served on Ottumwa City Council from 1985 to 1986, was a member of the Ottumwa Chamber of Commerce Board and served as president in 1978, was past president of St. Patrick Parish Council and served as Octoberfest co-chairman and chairman for 20 years. He was a member of Poppin’ Johnnies, riding in the WHO Tractor Drive from 1997-2019 and also riding in the SE Iowa Tractor Ride. Dale was a board member and chairman of Ottumwa Water Works and a charter member of Chief Wapello Trails Committee. He worked for VA Transportation Services from 2006 to 2017, with over 3000 hours of volunteer service. Dale was 17 gallon blood donor.

He was preceded in death by his parents, 2 brothers, Ronald and Robert Gottschalk and two granddaughters Erin and Malli.

Mass of Christian Burial will be 10 a.m. Monday April 25th at St. Patrick Catholic Church with Father Patrick Hilgendorf presiding. For those unable to attend, the service may be viewed live on the Reece Funeral Home Facebook page. Burial will be in Calvary Cemetery with military honors by Walter B. Schafer Post #775 Veterans of Foreign Wars and O.B. Nelson Post #3 American Legion.

In lieu of flowers, memorials may be made to St. Patrick Catholic Church or St. Joseph’s Indian School in Chamberlain, SD.