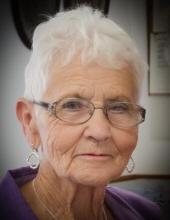 Roberta Mae Boyd, 86, of Fairfield, IA passed away on Thursday, January 14, 2021 at Mercy Medical Center in Iowa City, IA. A graveside service will begin at 3:00 p.m. on Wednesday, January 20, 2021 at Sunnyside Cemetery in Milton, IA with Pastor Al Coffin officiating. Memorial contributions in Roberta’s honor may be directed to the Fairfield Senior Center and mailed to 306 Iowa Ave., Fairfield, IA 52556. Friends may leave online condolences at www.cranstonfamilyfuneralhome.com.

Roberta Mae Boyd was born in Keosauqua, IA on March 30, 1934 to Philip and Selma Cochran Dorson. She attended country school and graduated with the Cantril High School Class of 1951. On January 29 of that year, she married the love of her life, Charles Boyd in Memphis, MO. This was the beginning of a journey together that lasted almost 70 years. Together they became the loving parents of three children, Paula, Jim, and Shiela. Roberta understood the value of hard work having been raised on the family farm. She continued working there until the family moved to Fairfield, IA where she helped to support the family by waitressing and working at Universal. After many years living in the Fairfield area, Roberta and Charles moved near Kansas City for Charles’ work. It is here where she began selling Avon. She not only enjoyed selling the products but also the friendships that she made over the years. She cherished those relationships and continued to sell Avon up until just a few years ago. When Charles retired, they moved to Milton, IA where Roberta was active in the Milton Methodist Church, PEO, and the Milton Historical Society. Roberta and Charles wintered in Texas where Roberta took advantage of every opportunity to get dressed up in a costume for local activities and made Charles participate as well. Eventually, their journey in life brought them back to Fairfield, IA. Roberta was a member of the Fairfield First United Methodist Church and enjoyed quilting and sewing. She cared deeply for her family and loved watching it grow with the addition of grandchildren and great grandchildren. She will be deeply missed by her family and the many friends she made along the way.

Roberta was preceded in death by her parents, her husband, Charles Boyd, a brother, George Dorson, and two sons-in-law, Bob Wilson and Bob Gerleman.