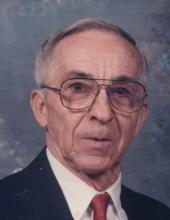 A 1944 graduate of Martinsburg High School, Richard was drafted into the U.S. Army in September 1944 and discharged in 1946. He served overseas after the Battle of the Bulge in World War II, serving with the 103rd Division near Bastogne, Belgium ending his career in the Army in Innsbruck, Austria.

After returning home, he worked with his father and brother in the carpentry business. He later was employed by Connor Brothers in Sigourney for many years and also worked for Aller Construction retiring at the age of 62.

Richard loved his flowers and yard work. He was well known for his crafts, especially his bird houses, benches and most recently his outdoor sheds which he sold at garage sales.

He is survived by his step-grandson, Chris Miller of Corinth, TX; two step-great-grandsons; several nieces and dear friends, Jess and Vickie Terrell of Martinsburg.

He was preceded in death by his parents; step-daughter, Connie Sheets Miller; step-grandson, Curt Miller and his brothers, Rex and Willis Knaak.

Visitation is open from 10 a.m. to 6 p.m. Tuesday, May 4th, at Reece Funeral Home. Family and close friends will be present one hour prior to the service to greet others.

Burial will be in Memorial Lawn Cemetery with military honors by Arendt-Bowlin-Stubbs Post #83 American Legion.

Memorials may be made to Arendt-Bowlin-Stubbs Post #83 American Legion or Hedrick QRS.