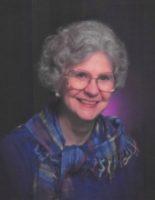 Loretta G. Eagan Rinaberger, 89, of Fairfield, IA passed away Friday, October 18, 2019 at her home under the care of Hospice Compassus. Visitation will begin at noon on Tuesday, October 22, 2019 at the Cranston Family Funeral Home in Fairfield, IA with the family present to greet friends from 5:00 p.m. until 7:00 p.m. Burial will be held in the Midway Cemetery in Floris, OK on Saturday, October 26, 2019 at 11:00. Memorial contributions in Loretta’s honor may be directed to the First Baptist Church. Friends may sign the online guestbook at www.cranstonfamilyfuneralhome.com.

Loretta was born to Charles Edwin Eagan and Dora Gladys (Ward) on November 27, 1929 in Beaver County Oklahoma. Loretta’s grandparents were early pioneers in the Oklahoma Panhandle, northwest of Forgan. Paternal grandparents were PL and Flora Eagan; maternal grandparents were DR and Fannie Ward. During the Dust Bowl her family spent some years in Denver. Her husband John Thomas’ family were homesteaders in the Ditch Valley region of Harper County OK. She married John Robert Thomas of Rosston, OK in 1950. She later married Don Rinaberger of Fairfield. Loretta completed High School at Greenough in 1948 and graduated in 1952 from Panhandle A&M at Goodwell, OK. She earned a master’s degree from Truman State University in 1978. She began her teaching career in Forgan Oklahoma in 1953-54. She moved to Fairfield in 1969 and began teaching elementary students at Logan, Lincoln and Lockridge, until her retirement in 1992. Loretta enjoyed socializing with friends each week and was active in her church. She had an excellent memory for the students she taught. For several years, she acted as Chaplain for Women’s Club and portrayed “Mrs. McIlhinny” at McIlhinney House. A voracious reader, Loretta was seldom without a book in hand. Loretta was a member of the First Baptist Church in Fairfield, Fairfield Women’s Club, Iowa Retired School Personnel, Delta Kappa Gamma, and the Friday Flexibles women’s breakfast group. She enjoyed Tuesday morning coffee with friends.

She was preceded in death by her parents and her three siblings, Doris Bailey, E. Eugene Eagan and Edna Gray.