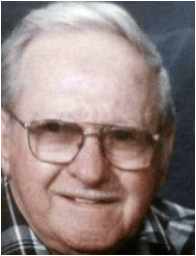 He was born December 16, 1934 in Ottumwa to James Madison and Esther Viola Carter Shepherd. He married Donna June Randall February 20, 1954.

A resident of Ottumwa all of his life, he worked for 17 years at John Morrell and Co. He earned his CDL from Indian Hills Community College Truck Driving School, graduating as one of the top of his class. He drove for Ideal Ready Mix, retiring in 1992.

George attended Seventh-Day Adventist Church. He enjoyed sports, bowling and watching NASCAR, as he was a Bill Elliott fan. He also was a fan of the St. Louis Cardinals and the Minnesota Vikings. He loved watching Ottumwa Bulldog sports especially girls softball and boys football. His greatest joy was watching his grandchildren’s, great grandchildren’s, nieces and nephews games. He also enjoyed watching construction and visiting about Ottumwa history.

He was preceded in death by his parents; a son, Jesse Shepherd; a daughter, Sheila (Johnny) Routh; a grandson, Randy Mobley; two brothers, Jim (Judy) Shepherd and John Shepherd; a brother-in-law, Raymond Rupe.

Visitation will be open after 11 a.m. Wednesday, February 23rd at Reece Funeral Home with his family present to greet friends from 5 p.m. to 7 p.m. Wednesday.

Funeral services will be 1 p.m. Thursday, February 24th at Reece Funeral Home with Pastor Jeremy Clark officiating. For those unable to attend, you may watch the service live on the Reece Funeral Home Facebook page. Burial will be in Shaul Cemetery.

Memorials may be made to Seventh-Day Adventist Church.