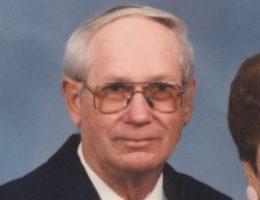 Donnie was born on the family farm 3 miles north of Plano, Iowa, the third son of Merle and Ova (Samuelson) Jones.  He entered the world at 3:00PM on the third day of the third month in the year 1933 (3/3/33).  He would often say 3 was his lucky number, noting his birthday as well as the fact that he had 3 brothers, 3 sons, and 3 grandsons.  When Donnie was five years old his mother passed away from tuberculosis, leaving him to be raised by his father and grandmother, Ollie Jones.  As a teen, Donnie lost his father in a car accident.  Donnie remained on the family farm with his siblings, attending Seymour Community Schools and graduating in 1952.  After high school Donnie began hauling rock, before being drafted into the United States Army during the Korean Conflict, serving from 1953-1955 stationed in Colorado Springs, Colorado.

Donnie and Karen Sue Sebben met in the fall of 1958 while she was still in high school.  Karen loves to tell the story of him going to Seymour football games to watch her twirl her baton in the marching band.  The two became engaged on Christmas Eve and were united in marriage on May 23, 1959.  To their union, three sons were born: Donnie Merle Jr, Michael, and Chris.  When they were growing up, Donnie loved taking his boys boating and camping, especially to the State Fair, as well as watching them play sports and breaking up their “disagreements”.  Donnie enjoyed hunting, working on his truck, and was a Lionel Trains enthusiast. In their younger days, he and Karen were competitive bowlers, earning several trophies throughout the years.

In 1952 Donnie started Jones Trucking, a business which his youngest son, Chris, would later join.  Donnie spent many hours hauling rock across southern Iowa and northern Missouri, helping to build Lake Rathbun Dam and numerous highways in the area. He was very proud of always being the first one at the rock quarry every morning to get to “hauling”.  Each of his sons and his grandchildren have fond memories of riding along with him in the dump truck, as well as calling for him on the CB in the dining room, “Bluebird, are you there?”

Throughout his life Donnie enjoyed spending time with his wife, children, and grandchildren.  He was known for his calm nature and even keeled ways, as well as being just a bit mischievous.  He loved telling a joke and making people laugh. Donnie Merle remembers one of the few times his dad got tense was when he made the comment that he had spent half his life waiting on his sister Joann when she was running her usual 10 minutes late. Donnie and Karen liked traveling to Las Vegas, having gone a total of 20 times during their marriage.  Donnie loved the St Louis Cardinals, taking his family on many weekend trips to Busch Stadium, including the entire Jones clan in 2009 to celebrate his and Karen’s 50th wedding anniversary.  Ten years later in May of 2019 the couple marked their 60th anniversary with family and friends on a dinner cruise around Rathbun Lake.

Visitation for Donnie Merle Jones, Sr will be held at the Lange Funeral Home in Centerville, Iowa on Tuesday, November 26th from 2:00-7:00PM with the family present from 5:00-7:00.  Funeral Services with be at 11:00AM on Wednesday, November 27th at the Plano Christian Church in Plano, Iowa.  Active pallbearers will be his grandsons: Chase, Chance, and Jalen.  Honorary pallbearers will be his granddaughters: Michelle, Nicole, Jacey, Alicia, and Kalea.  A committal service with Military Rites will follow the funeral at Crossroads Cemetery; a lunch will be served at the church following the committal service.  In lieu of flowers, memorials may be made to the family to purchase flags for Crossroads Cemetery, and may be dropped off or mailed to Lange Funeral Home and Crematory, 1900 South 18th Street, Centerville, Iowa 52544.

When Tomorrow Starts Without Me

When tomorrow starts without me

That an angel came and called my name

And took me by the hand.

The angel said my place was ready

In Heaven far above

And that I’d have to leave behind all those I dearly love.

But when I walked through Heaven’s Gates

I felt so much at home

For God looked down and smiled at me

And told me “Welcome Home”.

So when tomorrow starts without me

For every time you think of me

I’m right here in your heart.