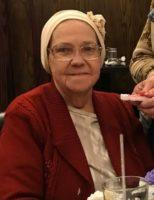 Donnabell was born on October 14, 1935 in Centerville, Iowa, the daughter of Jobie and Rosetta (Papach) Smith.  She was united in marriage to Richard Repp, and to this union, three children were born, Cheryl, Clay and Wayne.

Donnalbell loved baking.  She was especially fond of making cinnamon rolls for the people she loved.  She also enjoyed making homemade bread and chicken and noodles.

Donnabell was preceded in death by her husband, Richard Repp; her parents, Jobie and Rosetta Smith; a brother, Richard Smith; a daughter in law, Denise Bankson Repp; and a granddaughter, Faith LaNae Repp.

Per Donnabell’s wishes, cremation has been accorded and private services will be held.  Memorials may be made to Cheryl Kauzlarich, to be determined at a later date, and may be dropped off or mailed to Lange Funeral Home and Crematory, 1900 South 18th Street, Centerville, Iowa 52544.  Condolences may be shared online at www.langefh.com.