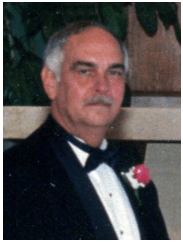 He was born December 21, 1941 in Ottumwa to Charles P. and Irene Elizabeth Williamson Canny Sr. He married Caroline Gabrys August 3, 1968.

He worked as an assistant manager for a short time at Kresges in Ottumwa and for the majority of career for Kmart in Lansing, IL, retiring in 2004. He moved back to Ottumwa in September of 2010.

He was preceded in death by his parents; a brother, Michael Canny; a sister, Carol Wagner; a special aunt, Mary Genochio.
Private funeral services will be 1 p.m. Thursday, August 6th at Reece Funeral Home with Fr. James Betzen C.PPS. officiating. For those wanting to view the service, you may watch on the Reece Funeral Home Facebook page. Burial will be in Ottumwa Cemetery.

Limited open visitation will be 1 p.m. to 6 p.m. Wednesday at the funeral home. Online condolences may be left for the family at www.rfh-ia.com.