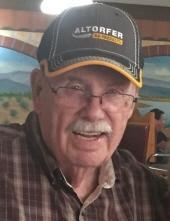 He was born on July 11, 1936 in Antelope, KS to Francis and Maggie (Hammer) Boettcher. Willy was the youngest of six children. His father was a heavy equipment operator and their family relocated many times to various states for his job. Willy graduated from Eldon High School in 1954 and followed in his father’s footsteps as a heavy equipment operator. In 1958, he enlisted in the US Army and was stationed in Germany, where he met his future wife, Elsa Kordeck. They married in Boblingen, Germany on February 14, 1960. Elsa preceded him in death on March 20, 2005. On April 8, 2006, Willy married Sheri Bookin, who survives him.

Willy and Elsa moved to the states and settled near his parents’ farm in Moulton, IA. They eventually moved to Eldon, where they had three daughters. He operated heavy equipment for Strother Construction over the next 15 years. Willy was also an over the road truck driver. He decided to change jobs when his daughter didn’t recognize him on his return home from one of his long over the road assignments. Willy decided to enter law enforcement to be close to home. He joined the Ottumwa Police Department on May 1, 1968 and their family moved to Ottumwa shortly after. He graduated the Ottumwa Police Academy as Valedictorian in December 1969. Willy served as a patrolman, swing-shift commander, detective, and Chief of Police. He received the Distinguished Service Award in the first year it was awarded. Willy retired from the police department as Deputy Chief in June 1994 and returned to operating heavy equipment, this time for Bud Heckert and Sons. He served in the Iowa National Guard for several years and was a part-time instructor in the Police Science Department at Indian Hills Community College. Willy was a member of, and attended Bible study at, Trinity Lutheran Church in Ottumwa. He was a man of faith and an excellent role model. He enjoyed being a part of several men’s coffee groups where they all liked to share stories. Willy was an avid reader and enjoyed model airplanes and antique tractors. He loved the time he spent in Kansas with his uncles on their farm. He knew no stranger, had a wonderful smile and laugh, and a great sense of humor and wit. Willy retained his wit to the end, when one of his daughters said “I love you dad”, he replied “well, you ought to.”

Willy was preceded in death by his parents; a step-son, Doug Bookin; his brother, Edwin, and his sisters Evelyn Benn, Ellen Grove, Ruth Pauls, and Hazel Cloke.

He is survived by his three daughters, Silvia (Mark) Drafahl, Karin Gibbons and Pam (Dave) Horras; his grandchildren, Nolan (Julia) Drafahl, Stefan (Jillian) Drafahl, Erich Drafahl, Blake and Seth Horras, Hannah (Topher) Loos, Carly Gibbons; his great-grandchildren, Rose and Louie Drafahl; and many nieces and nephews. He is also survived by his stepfamily, Julie Springer and daughter, Sammi, and Jacque (Sam) Bookin-Nosbich and their children Tyler, Gabby, Alli, and Grace.
Public funeral services will be 1 p.m. Saturday, March 6th at Trinity Lutheran Church with Rev. James Preus officiating. Military honors will be conducted by Walter B. Schafer Post #775 Veterans of Foreign Wars and O.B. Nelson Post #3 American Legion. The family requests those in attendance wear a mask. Cremation will follow the service. For those unable to attend, you may watch live on the Reece Funeral Home Facebook page. Private inurnment will be in Eldon Cemetery at a later date.

In lieu of flowers, memorials may be made in his name to Trinity Lutheran Church in Ottumwa or the Parkinson’s Foundation.