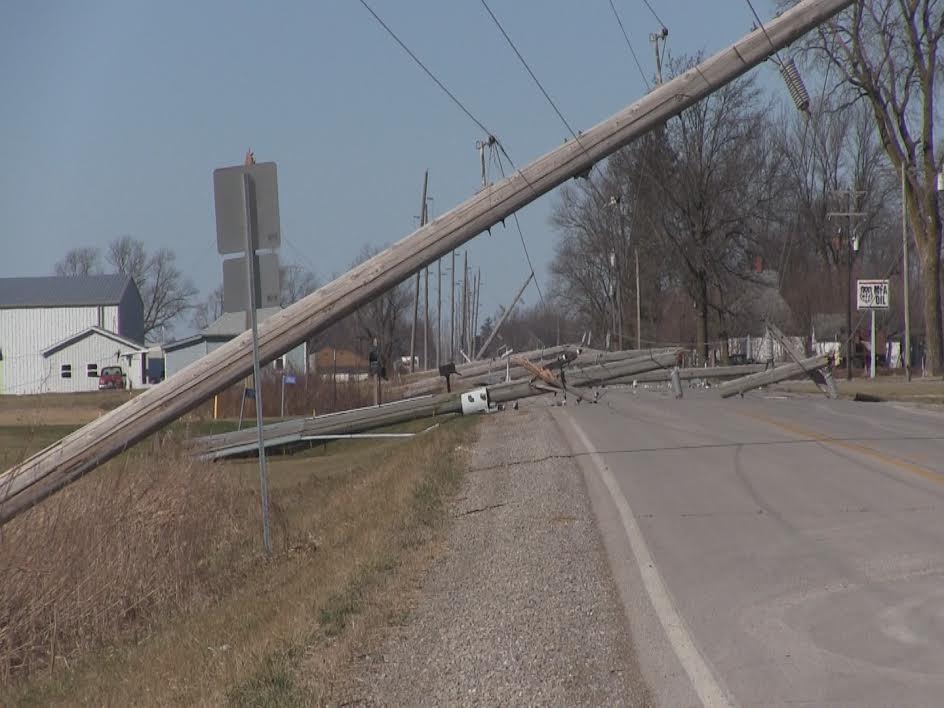 Watch this story instead of reading it. Our video is attached below the article text.

As many as four tornadoes touched down across Iowa Monday evening, two of those struck the southeast Iowa communities of Seymour and Centerville.

In Seymour, the school suffered extensive damage especially to the gyms where the roof was ripped off of both the old and new gymnasiums.

Police say the school building itself also suffered extensive damage especially to the 2nd and 3rd floors. The Seymour school district canceled classes for the remainder of the week. The district will finish the school year using the Seymour Care Center and the Methodist Church. Nobody was inside the school when the storm struck..

Many students still gathered at the school on Tuesday to help with cleanup efforts. They were seen in nearby fields picking up insulation and other debris.

Nearly 100 people were evacuated immediately after the storm because of a natural gas leak. They stayed overnight in an emergency shelter. The Red Cross has set up a shelter in the community center. Hy-Vee employees from Centerville, Chariton and Corydon are grilling burgers and hot dogs free of charge for those effected by the storm.

Power is out across much of the town and most roads are blocked due to downed power lines and other debris.

Meanwhile, in Centerville officials are cleaning up after a tornado warned storm also struck that community. The storm caused extensive damage on the south side of Centerville especially surrounding the industrial areas.

A number of businesses were damaged across the south side of town including Lee Container and Wells Vehicle Electronics.

Workers inside Wells Electronics said supervisors moved everyone into a storm shelter about five minutes before the storm struck.

Power was cut to around half of Centerville residents. Crews were on scene in both Centerville and Seymour trying to get power restored. Some residents report being told it could take up to three days to fully restore power.

One home just south of Ottumwa lost half it’s roof as a tornado warned storm moved through the County.

The National Weather Service in Des Moines has survey crews in the area today to help determine the strength of the storms.

The NWS has confirmed that an EF-2 tornado with wind speeds 115-125 MPH struck the industrial park in Centerville. The tornado had an intermittent path eight miles long.

An EF-2 tornado with wind speeds of 115-125 MPH also struck Seymour. The storm had a path nearly 13 miles long.

The weather service also says damage to a home on Madison Avenue south of Ottumwa appears to have been caused by high winds.