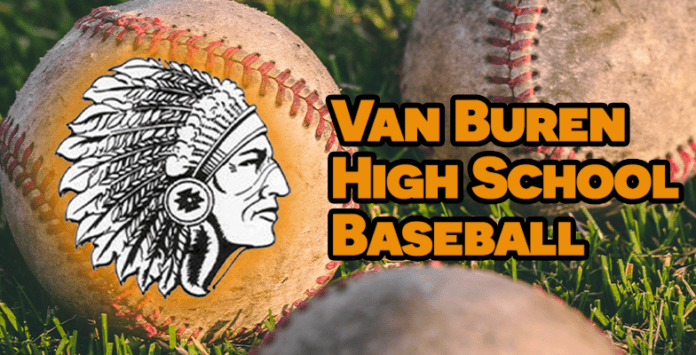 DANVILLE, IA – In their third game in as many days, the Van Buren County Warriors (2-2, 0-2 SEISC – South) traveled to Danville Thursday night to take on an improved Bears (2-2, 0-2 SEISC – South) squad. Having collected just a 10-84 overall record from 2016-2019, including last year’s 2-16 finish, Danville had already matched their win total from a season ago after beating Wapello Wednesday night, 8-6. The Warriors entered their meeting against the Bears fresh off a road win themselves, 9-3 at Highland the night before.

A fast start is what Van Buren County Head Coach Chad Scott wanted to see from his team Thursday night, and that’s exactly what the Warriors delivered. After Danville starting pitcher Kyler Schwartz struck out the first two to begin the game, the bats came to life as Van Buren strung together seven consecutive hits and brought home five runs. Treyton Bainbridge, Casey Yochum, Taylor Sprouse, and Tommy Adkins all drove in runs to give the Warriors a 5-0 lead.

The run support was a welcome sight for Yochum who was making his first career start on the mound at the varsity level. The Bears did put runners on second and third with just one out in the bottom of the first, hoping to answer the five-run half inning from Van Buren, but Yochum battled back to strikeout Klayton Kleinkopf and get Ethan Unzicker to groundout.

The Warriors added to the lead in the top of the second with another two-out RBI base knock from Yochum to score Tony Davison, pushing the advantage to 6-0. The score remained the same until the third when Danville brought two across the plate, however Van Buren County answered right back with two of their own in the top of the 4th on a two-RBI double from Davison to lead, 8-2.

Jackson Manning entered in relief of Yochum on the mound and promptly sat down the Bears in order in the bottom of the fourth inning. In the top of the fifth, the Warriors extended their lead to 12, 14-2, on two hits, two Danville errors, and four batters reaching on either a walk, or hit-by-pitch. With a chance to end the game in the bottom of the inning, Manning came back out and retired the first two batters before Tyler Hartman connected on a two-out double to extend the inning for the Bears. Three straight Warrior errors, followed by a two-RBI single from Schwartz, brought the deficit back down to nine, extending the matchup into the 6th.

Running out of pitching, Danville allowed ten runs in the next frame, walking four and hitting three batters, as Van Buren opened a 24-5 lead. Back on the mound in hopes of closing the game this time around, Manning did allow a one-out double to Grifen Molle, who later came around to score, but the freshman closed out the double-digit win, 24-6, getting Tyler Hartman to groundout to Jonah Heckenberg at shortstop.