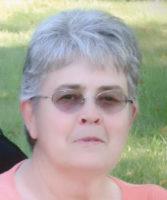 Vickie R. Vorhies Glover, 69, of Keosauqua, Iowa passed away at home on October 20, 2019 after a short battle with cancer. She was born on November 13, 1949 in Fairfield, Iowa to Raymond and Ruth Arlene Steele Lyon. Vickie graduated from Van Buren Community High School with the class of 1967. She married Robert Vorhies and together they raised three children Angela, Jeff and Mike. Robert passed away in 1996. Vickie then met Gary Glover and they were married in 2009.

Vickie was a homemaker and also worked at several local businesses over the years until her retirement in 2015. She was an avid fan and supporter of Van Buren County Athletics. She could be found in the bleachers for most of the Van Buren Warriors home games. Vickie was also a Hawkeye fan, and she was known for her delicious cookies and chocolate mousse desert. Most of all Vickie enjoyed spending time with her grandchildren. She will be greatly missed by her family and friends.

She was preceded in death by her parents; husband, Robert Vorhies; and a brother, Jim Metcalf.

Funeral Services will be at 11:00 a.m. on Thursday, October 21, 2019 at Pedrick Funeral Home – Keosauqua with Pastor Phil Campbell officiating. Visitation will be open at 3:00 p.m. on Wednesday, October 20, 2019 with family present to greet friends from 5 – 7:00 p.m. at Pedrick Funeral Home – Keosauqua, Cremation will take place following the service and burial will be at a later date in Maple Hill Cemetery in Birmingham, Iowa. In lieu of flowers, memorials may be directed to the Van Buren County Sports Booster or the Birmingham Homecoming Committee. Online condolences may be directed to www.pedrickfuneralhome.com