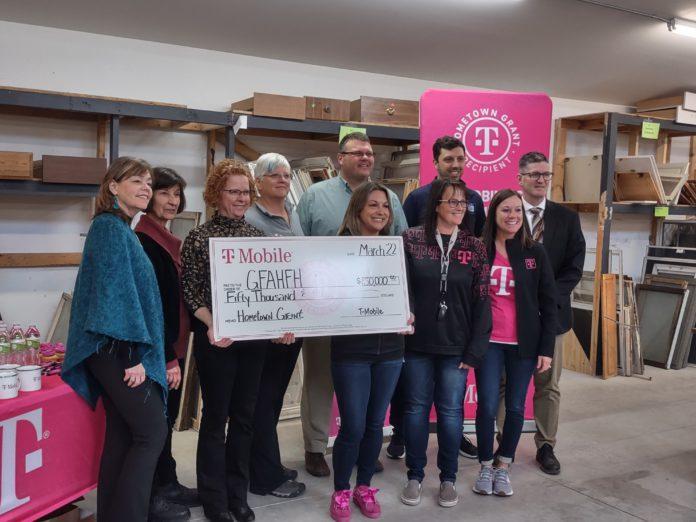 T-Mobile presented their recently announced $50,000 grant to representatives of Fairfield’s Habitat For Humanity on Thursday.

Fairfield had been announced earlier this week as one of 25 small towns to be awarded the grant from the T-Mobile Hometown Grants Program. Launched in April of 2021, it is a $25 million, five-year initiative to support the people and organizations who help small towns across America thrive and grow by providing funding to kickstart important new community development projects. Theresa Rachele, Store Manager of T-Mobile in Fairfield presented the check. She stated that the funds will be used for the foundations of the first 3 of 8 houses that the Fairfield Area Habitat For Humanity will be building.

Amber Stump with Habitat For Humanity explained her reaction to being awarded the grant.

“I don’t even have words for how exciting this is for our organization. funding is always a struggle and this is going to help us tremendously.”

Stump explained that their affiliate, the Greater Fairfield Area Habitat For Humanity, has been around for 25 years, typically building one house a year. She noted that the foundations for these homes can cost up to $17,000 each, thus the grant will be a major relief. The group also maintains a strong relationship with the Fairfield High School Construction Technology class.

Brian Stone, Principal of Fairfield High School, spoke of the Construction Tech program, which is a college level class for college credit. During the two-period class the students leave the classroom, go to a jobsite and learn from experienced professionals. He said that its a great thing for the students as they not only engage and give back to their communities, but also gain valuable work experience.