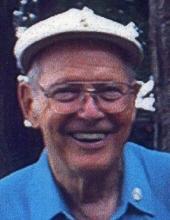 He was born August 9, 1923 in McGregor, IA to Severn and Frances Flatt Gutheil Olson. Spike moved to Ottumwa his senior year of high school and graduated from Ottumwa High School in 1942. He entered the Army Air Corps, where he learned to fly and became a flight instructor.

He married Deloris Kathryn Gustaveson on December 25, 1945 and she preceded him in death on August 26, 2018.
Spike worked for Neiderhauser Airway and the Ottumwa Municipal Airport as a flight instructor. He joined his father-in-law at Gustaveson Insurance where he was an insurance agent. He sold the company to Noel Insurance where he worked until his retirement.

As a young man he enjoyed fishing at Leech Lake in Minnesota and pheasant hunting in Iowa. He spent many Saturdays parading as a clown for the KAABA Clown Unit or spending time at his cabin on the Des Moines River.
Spike was a member of First Lutheran Church, an active member of B.P.O. Elks Lodge #347, a member of O.B. Nelson Post #3 American Legion, Ottumwa Masonic Lodge #16 A.F. & A.M., Clinton Chapter #9, Ottumwa Council #31, Malta Commandery #31, Davenport Consistory, KAABA Shrine and Ottumwa Shrine Club, Ottumwa Clown Unit and The Royal Order of the Jesters.

Limited open visitation for friends will be 11 a.m. to 6 p.m. Wednesday September 2nd at Reece Funeral Home. Online condolences may be made at www.rfh-ia.com.

Memorials may be made to Shriners Hospitals for Children.