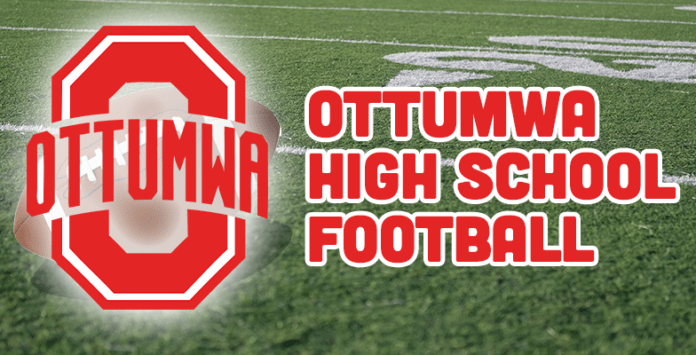 The Ottumwa football team still has one more chance to pick up a win this season, but if the Bulldogs are going to find a victory in the playoffs, they can’t afford the kind of the slow start they had Friday in the regular-season finale.

Ottumwa saw a previously-winless Ames football team jump out to a 28-0 lead by halftime, en route to a 42-21 final at Schafer Stadium. OHS ended the regular season with an 0-6 record, while the Little Cyclones moved to 1-4.

Ames racked up 348 yards of offense in the first half, before finishing with 512 yards on the night. Quarterback Tamin Lipsey engineered four first-half scoring drives, scoring twice on the ground with TD rushes of nine and 56 yards. Lipsey ended the half by guiding Ames on a 60-yard drive in the final 21 seconds, throwing a touchdown pass to tight end Corey Phillips with 0.4 seconds left on the clock.

Ottumwa, meanwhile, missed its chance to grab an early lead. Linebacker Matt Graeve picked off a deflected Lipsey pass on the opening drive of the game, and Ottumwa quickly drove into the Ames red zone. Quarterback Adam Denniston tried to fire a 12-yard pass to wingback Colton McKinnon in the back of the end zone, but the toss was picked off by a leaping DeAndre Isaac, and OHS would not reach the red zone again until the second half.

The Bulldogs did show some fight coming out of the locker room in the third quarter. After Trae Swartz returned a short kickoff to the 44, Ottumwa went to work on the ground, using a different formation than what they had shown in the first half. Punishing runs by Kie Glosser and Andy Palma moved OHS to the brink of the red zone, where on 4th down and three, Glosser broke through for a 22-yard score to put Ottumwa on the board.

Lipsey, however, had the answer for Ames, throwing touchdown passes on the next two drives for the Little Cyclones and putting the game out of reach. The Ottumwa offense did find the end zone twice in the fourth quarter. Denniston hooked up with McKinnon for a 39-yard touchdown pass, and Palma scored his first TD of the season from three yards out with five seconds left in the contest.

Glosser had 20 carries for a season-high 160 yards, topping the century mark on the ground for the third time this season. He ended the regular season with 476 rushing yards, five scores and an impressive 4.8 yards per carry.

Under the 2020 IHSAA format where every team enters the playoffs, Ottumwa will return to action next Friday night and play in its first playoff game since 2014. The IHSAA is expected to announce playoff matchups in all classes at noon on Saturday.