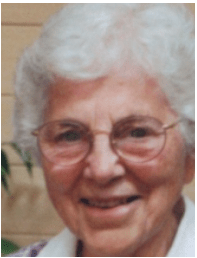 Mary Elizabeth Veith was born June 26, 1925 in Keokuk to Hiller J. and Mary Magdalen Heinz Veith. She entered the Congregation of the Humility of Mary in 1955 and professed vows in 1958.

Sister began her service caring for children at the Christ Child Home in Des Moines in 1958, but turned instead to a life of volunteer ministry serving the isolated. She described her work as visiting the shut-ins, including “people who are confined to their own homes, the nursing homes and the jail,” but also learned sign language and transcribed books into Braille, opening communication with those whose isolation was not physical, but sensory.

Sister Mary Hilary was certified as a Volunteer Braille Transcriber by the Library of Congress in 1975. Her outreach ministries earned awards and recognition both at the local and state level; she was awarded the “Ottumwa Good Samaritan” award in 1972, multiple certificates of appreciation from the Iowa Department for the Blind, The State of Iowa Governor’s Volunteer Award in 1990 and a Certificate of Recognition from the State of Iowa in 2004. The most telling of her awards, however, may be the 1978 Human Relations award bestowed by the First United Methodist Church in Ottumwa, which declared Sister to be “one whom Christian ethics are practice, not theory.”

Sister Mary Hilary is survived by many nieces and nephews as well as her CHM religious community.

She was preceded in death by her parents; her brothers Leo A., James F., John S. and Harold Veith; her sister, Rita Menke and her nephews, Michael Menke and Jim Veith.

On Tuesday, April 26th at 7 p.m., a Vigil Service will be held at Reece Funeral Home in Ottumwa. For those unable to attend the service it may be viewed live on the Reece Funeral Home Facebook page. Visitation will be one hour prior to the Vigil.

Mass of Christian Burial will be 11 a.m. Wednesday, April 27th, at St. Mary of the Visitation in Ottumwa with Father James Betzen C.PP.S. presiding. For those unable to attend the service, it may be viewed live on the Reece Funeral Home Facebook page. Burial will be in Mt. Olivet Cemetery on the Indian Hills Community College campus.

Memorials may be made to the Congregation of the Humility of Mary.