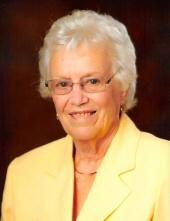 Shirley Ann (Best) Creek, 90, of Batavia, IA went to be with the Lord on Tuesday, January 12, 2021 at her daughter’s home, with her family by her side. An open visitation in her honor will be held from 1:00 p.m. until 7:00 p.m. on Thursday, January 14, 2021 at the Cranston Family Funeral Home in Eldon, IA. The family will not be present during this time. Mask and social distancing will be required. A private family service will be held, with burial in the Batavia Cemetery. Memorial contributions in Shirley’s honor may be directed to the family. Friends may leave online condolences at www.cranstonfamilyfuneralhome.com.

Shirley Ann Creek was born in Ottumwa, IA to Alonzo “Lonnie” and Laura (Swope) Best on June 13, 1930. She graduated from Ottumwa High School in 1948 and married her sweetheart, Robert Creek, of Batavia on October 6, 1949 at the Open Bible Church in Ottumwa where they were both members.

Shirley and Robert owned and operated a dairy farm north of Batavia for 21 years. She was known for serving hearty meals to all the farm hands and hay helpers. After moving to town, she bought the Batavia Drive Inn so everyone could enjoy her awesome cooking. Moving on with a new adventure, she joined Robert as a team semi driver for Rose Way Trucking in which they won Team Drivers of the Year. They traveled all over the United States and formed many lasting friendships.

Shirley was very active as a 4-H leader for many years and helped her children with their horse shows. She enjoyed camping with family and friends at Lake Rathbun, attending her grandchildren’s activities and Bible Study.
Shirley was a “God’s Gift” as a caregiver to her husband. She had a heart of gold and welcomed anyone into their home. She always had a smile on her face and a twinkle in her eyes, that we will carry in our hearts forever. She was a wonderful wife, mother, and grandmother that always made time for her family as well as having a cookie jar full of sweets.

Shirley was preceded in death by her parents; one sister, Betty Clark Crowe and a brother, Alivin Best.