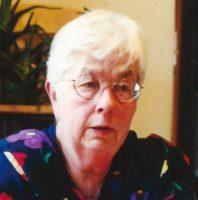 Ruth Evelyn Hawhee (née Cook) of Cantril passed away November 13, 2019 at the Van Buren County Hospital in Keosauqua. In hospice care since August, she had been able to remain in her own home until shortly before her passing.

Ruth was born February 23, 1933 to Ida Mae (née Pratt) and Jasper Ward Cook and grew up with her older brothers Charles and Cecil on the family farm in Ludlow township near Waukon, Iowa. She attended one-room country schools through 8th grade, and graduated from Waukon High School in 1950. She attended Iowa State Teacher’s College (now UNI) in Cedar Falls, graduating with a teaching certificate in the spring of 1952. On June 11, 1952, Ruth married S. Gale Hawhee who was eventually ordained a United Methodist minister. They were married for 47 years, serving parishes in eight Iowa communities, beginning with Elma in Howard County where Ruth also taught 6th grade for two years. Other assignments included Randalia in Fayette County, Merrill, Ocheyedan, Garner, Corydon, Salem-Cedar Rapids, and Keosauqua before retirement to Cantril in 1995. The couple had four children: Howard (b. 1953), Betty (b. 1956), Jerry (b. 1958), and Steve (b. 1962).

Ruth was preceded in death by her parents, by her husband Gale, her brother Charles, and by her youngest son Steve. She is survived by her children, Howard Hawhee (Pflugerville, TX), Jerry Hawhee (Cantril, IA), Betty Young (Ames, IA) and by her grandchildren, Angie (née Young) and Phil Leake (Des Moines, IA), Keri Hawhee and Adam Hawhee (both of Omaha, NE) and her three great grandchildren, Faith, Katie, and Nicholas Leake.

Ruth once remarked, “I pretty much enjoyed life, and the people we met in our churches.” She excelled in her roles as teacher, minister’s wife and mother, and learned much from the many people whose lives she touched over the years. She enjoyed quilting and sewing, gardening, camping, bird-watching, reading, and old movies. She was active in United Methodist Women, church circles, the Walk to Emmaus retreats, and many charitable and community projects. She was an accomplished cook and was well-known for her bread and other baked goodies, ever abundant, especially at Christmas time: her doughnuts were always in high demand, and were often runaway best sellers at church auctions. Ruth’s was a busy, full life, well and selflessly lived.

A memorial service in Ruth’ s honor will be held at 11:00 a.m. on Tuesday, November 19, 2019 at the Cantril United Methodist Church with Rev. Donna Olinger officiating. Inurnment will follow the service in Maple Grove Cemetery in Cantril, Iowa. In lieu of flowers, memorial contributions made be made to the Heifer Project and can be mailed c/o Jerry Hawhee, PO Box 233, Cantril, IA 52542. Online condolences may be directed to www.pedrickfuneralhome.com.