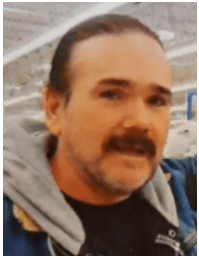 He was born July 7, 1962 in Texas to Jerry Lee and Kathleen Jeanette Burtlow Wiseman Sr.

Roger had served in the U.S. Army. He had worked for Mayflower Moving Company and had been a driver for Dr. Pepper.

He was preceded in death by his parents; a son, Roger Wiseman Jr., a grandson, Jude; and a brother Jerry Wiseman.

His body has been cremated and services are not planned at this time.