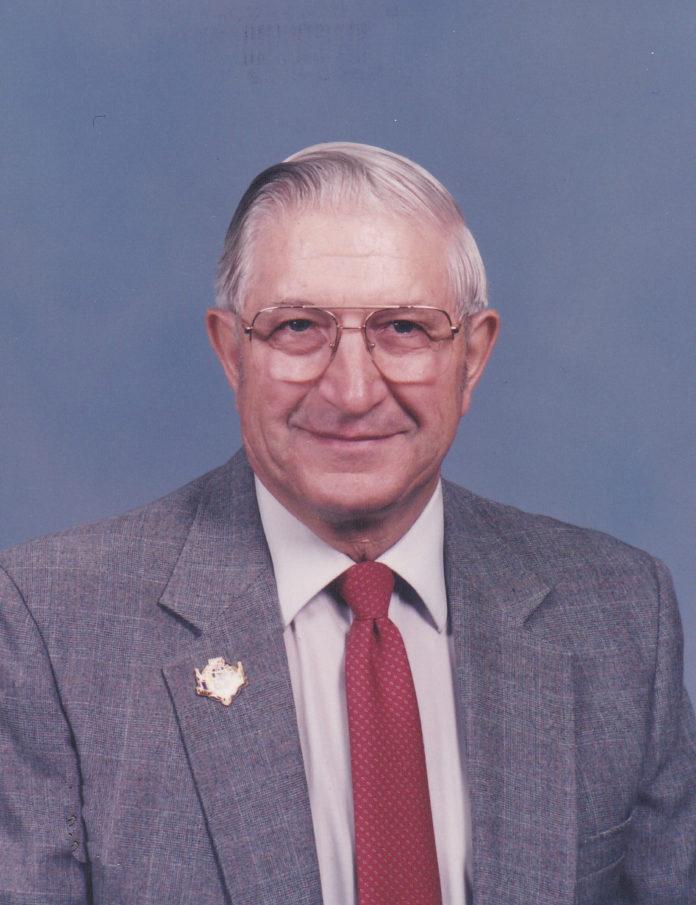 Raymond Lewis Dake age 94 of Fairfield, passed away surrounded by his family at Jefferson County Health Center on Sunday, March 6, 2022.  Raymond was born at home December 16, 1927, to John D. and Pauline P. Dake in Benton County, Iowa.  He was the eldest of six other siblings.

Raymond took pride in his heritage of growing up an Iowa farm boy.  An Army recruiter came on campus during his senior year of high school. Departing before the school year ended, Raymond and others enlisted in the U.S. Army to serve at the conclusion of WWII and Korean War.  He celebrated his 18th birthday on the shores of Korea and served until 1947.

Raymond returned to the Iowa family farm where he fell in love with the neighbor’s lovely daughter, Rosemary Irene Long, whom he first sighted riding a tractor with her father.  They married on August 27, 1950, in Walker, Iowa.  This began a dairy farming career continuing for 18 years.  Rosemary and Raymond raised four children.  During some years, Raymond farmed by day and worked nights for the companies of Collins Radio (Rockwell) and Quaker Oats.  He additionally served as Sunday School Superintendent at Spring Grove Methodist and then Coggon United Methodist Churches.

In 1971 the family transitioned from the farm to Mt. Vernon, Iowa.  Raymond then began a second career that would last 24 years as a soil conservation technician in Marion, Ottumwa and Fairfield, Iowa communities.  Raymond was instrumental in construction of Lake Sugema in Lacey-Keosauqua State Park.  Raymond and Rosemary retired in Fairfield, Iowa in 1994.  This same year, his devotion to others and years of volunteer activities earned him the Thousand Points of Light Award.

Raymond was an active member of the local Fairfield chapter of Lion’s Club in roles such secretary, chaplain, “Tail Twister” (always with a ready joke); even unabashedly donning a full Lion costume when the occasion arose (with ice packs in his belt for its cooling comfort).  Continuing to be active in his church, he was a member of the United Methodist Men’s group, served as Head of Trustees and other administrative positions, as well as singing in the Chancel Choir.

In October 2014, Raymond and his son, Brian, participated in a WWII Honor Flight to Washington, D.C. Raymond earned the Lifetime Achievement Award from the Lion’s organization in 2020.

Always ready to share his talents, Raymond enjoyed gifting his family with wood crafting pieces and framed puzzles.  His toy tractor collection impressed generations of visitors to his home.  He credited his vast accomplishments to the love of his life, Rosemary, and his faith.

Survivors include his wife, Rosemary; daughter, Carolyn (Bartemeyer) and husband Randy; son, Kim Dake and his wife Penny; son, Brian Dake and his wife Cheryl; and son, Bruce Dake and his wife Susan; 10 grandchildren; and siblings, Evalyn Moorehead, Lois Sparks, Delbert Dake, and Nancy Pasker.  He was preceded in death by his sisters, Mary Lou Bell and Dorothy Locke.

In lieu of flowers & plants, memorial donations may be made to the:  Fairfield Lions Club and the First United Methodist Church of Fairfield in care of this address:  Rosemary Dake, 108 Cardinal Drive, Fairfield, Iowa 52556.  Online condolences may be made to the family at behnerfh.com.