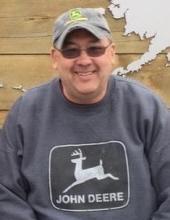 Randall “Randy” Wayne Fields, 63, of Libertyville, IA went home to be with the Lord on Thursday, September 3, 2020 at the University of Iowa Hospital surrounded by his loving family. His death was a result of complications from COVID-19. A graveside service will begin at 2:00 p.m. on Friday, September 11, 2020 at the Fell Cemetery near Libertyville. Visitation will be held on Thursday, September 10, 2020 from 9:00 a.m. until 7:00 p.m. at the Cranston Family Funeral Home in Fairfield, IA. The family will not be present during this time. Friends and family are invited to the family’s home at 2631 Douds Rd., Libertyville, IA on Thursday evening, September 10 from 5:00 p.m. until 8:00 p.m. to visit with the family and share stories of Randy. Memorial contributions in Randy’s honor may be made to the family to be decided at a later date. Friends may sign the online guestbook at www.cranstonfamilyfuneralhome.com.

Randy Wayne Fields was born on March 29, 1957 in Fairfield, IA to Arnold and Dolores Bonnett Fields. Randy attended school in Libertyville and Fairfield before graduating with the Fairfield Class of 1976. Shortly after graduation Randy entered the work force by starting his career at Dexter in Fairfield. He worked in maintenance where he was a devoted employee for over 43 years. Randy genuinely loved his job and the people that he was fortunate enough to work with and call friends. On September 2, 1978 at the Fairfield United Methodist Church, Randy married the love of his life, Kathy Johnson. This was the first chapter of a story that lasted over 42 years and saw them become loving parents to three children: Hunter, Ashley and Dakota. Randy had a passion for farming that started at a young age working alongside his father and continued as he passed this on to his son Dakota. Randy was an avid hunter and a strong supporter of the second amendment. He always enjoyed time spent on a motorcycle, but as he became a grandfather, side by side and tractor rides with his grandson Joshua became his new favorite. He was proud of his town of Libertyville which he always considered home. Randy was a man of faith who found comfort in time spent at home with his family, friends, and his dogs. He was a loving husband, father, grandfather, brother, uncle, and friend who left a lasting impression on those lucky enough to call him family and those honored to call him friend.