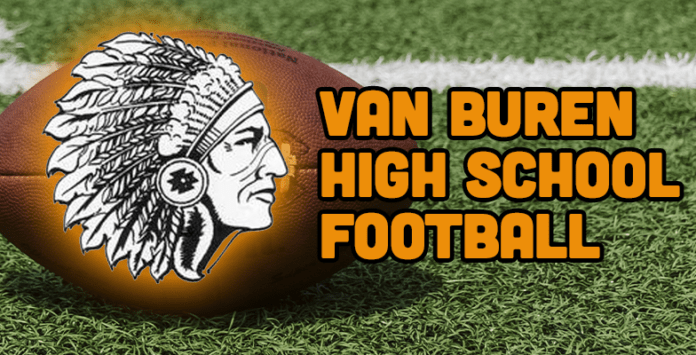 SIGOURNEY, IA – Celebrating a Homecoming Friday night, the fifth-ranked team in Class 1A, Sigourney-Keota Cobras (3-0, 2-0 1A-6), welcomed the Van Buren County Warriors (1-1, 0-1 1A-6) to town for a district match-up. Looking to bounce back from a 41-6 loss last Friday night versus Mediapolis, the Warriors hoped to play spoiler on a night of celebration for Sigourney-Keota.

Having won the toss and electing to receive, Van Buren County had the opportunity to set the tone early versus the #5 Cobras, but a botched snap between senior quarterback Lane Davis and senior center Treyton Bainbridge resulted in a lost fumble on the first play from scrimmage by the Warriors offense. Sigourney-Keota wasted no time in taking advantage of the excellent field position, as junior Colton Clarahan connected with senior wing back Brady Duwa on a 16-yard wheel route for a touchdown, just 17 seconds into the game.

The quick-strike ability from the Cobras continued to remain on display in the opening 12 minutes, particularly from the do-it-all athlete Duwa, who followed his first touchdown reception with another six-yard catch from junior Cade Molyneux, a 55-yard punt return, and a six-yard run with 1:52 remaining in the first quarter. By the end of the opening frame, Van Buren County found themselves trailing 35-0 with the other score coming from senior tailback Sam Sieren on a 19-yard touchdown run following a second Warrior fumble.

The only deterrent from the home team continuing their fast paced scoring in the second quarter was the running clock which went into effect after Sigourney-Keota took a 35-point lead. Still, the Cobras were able to put two more touchdowns on the scoreboard in the second with Molyneux finding Duwa for his fifth touchdown of the half, this time a 34-yard pitch-and-catch, and junior Ethan Shifflet scoring with five seconds remaining in the half to bring the halftime lead up to 48-0.

Still, despite the deficit, Van Buren County continued to battle in the second half of play, finally removing the goose egg from the board with 8:17 remaining in the game as sophomore fullback Sam Warth ran in his fifth rushing touchdown of the season on a three-yard rumble up the middle. With the defense keeping the Cobras’ second-team offense off the board, the Warriors were able to cut the lead back down to 35 with freshman Cayden Summers finding a crease in the Sigourney-Keota defense on a 30-yard touchdown run in the final four minutes, 48-13, but the outcome of the game had been decided by that point.

The Cobras remain unbeaten on the season prior to traveling to Packwood next Friday night to take on the Pekin Panthers (1-1, 0-0 1A-6). Van Buren County will return home to Keosauqua next Friday searching for their first district victory with Louisa-Muscatine (0-4, 0-2) visiting the Warriors. The Falcons will be on the road for a second straight week after Friday night’s 43-8 loss in Eldon versus the Cardinal Comets.