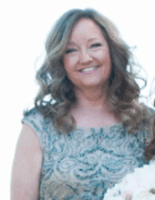 Peggy Lea Anderson, the daughter of Dr. Folke Carlson and Ruth (Monson) Carlson, was born on February 14th, 1956, in Fort Collins, Colorado. She was raised and educated in Fort Collins where she graduated with the class of 1974. It is impossible to perfectly capture who she was because there was no one else we had ever met like her. Whether you ran into her at the bank, grocery store aisle, or a school event, her radiant smile made you feel like she had been planning to meet with you all day to have that conversation. She had the extraordinary quality to make others feel special and she did this through selfless acts. Peggy spent many years in the Fairfield Community School District as a school associate, had a heart for prison ministry, and was a youth leader in Southeast Iowa.

On February 27th, 1976, Peggy was united in marriage to Larry Anderson at the Hope Lutheran Church near Germanville, Iowa. They met prior in Omaha, Nebraska at a Youth Conference where they began a friendship that later developed into a lifetime of memories on the family farm. Here they raised three daughters: Cari, Laura, and Melanie. Peggy passionately loved her girls and was extremely proud of them. She enjoyed spending time playing games, event planning, baking extravagant birthday cakes, family vacations, and anything that involved making cherished memories with loved ones. Even though she had a classy composure, behind closed doors her contagious giggles and silliness lit up a room. As a woman of faith, wife, mother, and a beautiful friend, her desire was to forgive quickly, show grace and compassion, and wanted us to love one another as Christ did for us.

Peggy went on a new journey to heaven by freeing herself of a battle with cancer in order to meet Jesus Saturday, January 18th, 2020. She kept her beautiful smile to the end and never complained even though she went through so much adversity. She was preceded in death by her father, Dr. Folke Carlson, mother, Ruth (Monson) Carlson, brother-in-laws, Jim Sundberg and Loren Hill. Survivors left to carry out her legacy include her husband, Larry Anderson. Three children: Cari Anderson, Laura (Spenser) Atwood, and Melanie (Sam) Collora of Germanville, Iowa. Grandchildren: Easton and Maddax, and a Collora Blessing on the Way. Two Sisters: Diane Carlson Sundberg and Linda Hill.

A Celebration of Life Party will be held from 1:00pm – 5:00 pm on Sunday, January 26th, 2020 at the Lake Darling Lodge, Brighton, Iowa. The Service will be held at 2:00pm at the same location Monday, January 27th, 2020 followed by a burial at the final resting place on the family farm. The body will only be present during the Service for final goodbyes on Monday, January 27th. To honor Peggy Anderson’s unconditional compassion, donations can be made to the Cornerstone Community Well (CCW) and Little Superheroes to carry on her purpose. Friends may sign the online guestbook at www.cranstonfamilyfuneralhome.com.