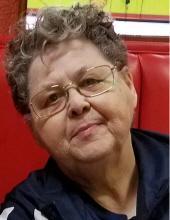 She was born August 23, 1946 in Indianola, IA to Marvin and Leva Eileen Lettington Hill. Jeannie married John Kersey in 1964 and they later divorced. She married Robert “Bob” DeWeese in 1980 and he preceded her in death in 1995.

A 1964 graduate of Indianola High School, she had worked as a caretaker and in the dietary department in various nursing homes. She also worked with in-home health care in Keokuk County.

Jeannie became the primary caregiver for her husband, Bob, when he was ill. After his death, she lived in Warrensburg, MO for 3 years, moving back to Ottumwa in 2001.

She was a member of Albia Road Baptist Church where she enjoyed meeting with the women’s group. Jeannie loved collecting Elvis memorabilia, watching the Kansas City Chiefs and the Iowa Hawkeyes and especially enjoyed spending time with her grandchildren.

She was preceded in death by her parents and an infant daughter, Jean Ann.

Her body has been cremated and no services are planned.

Memorials may be made to Hospice serving Davis and Wapello Counties.