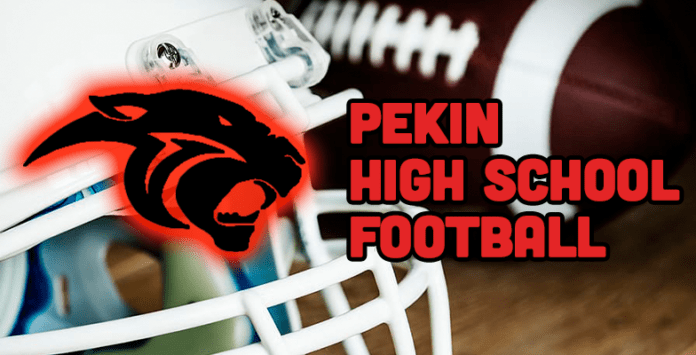 In one of the most exciting games in the state of Iowa on Friday night, Pekin rallied to shock Central Lee by a score of 37-31.

It didn’t start very exciting for Pekin as Central Lee forced a Pick Six on the opening drive of the game by the Hawks Kade Mahyr. The Panthers came back on the next drive and turned the ball over again, but the Hawks were denied another score as Senior Mason Juhl blocked the field goal, the first of two he’d block on the night.

Pekin’s first touchdown came courtesy of a 12-yard run by #12 Cael Baker. Central Lee would answer back with a 77-yard touchdown reception from Dylan Steucker to Jaxon Bekter, a combination that was on fire for most of the night for Central Lee. Steucker would finish with four touchdown passes and Bekter would contribute 153 receiving yards and two touchdowns. Pekin led 14-13 going into the halftime break.

Central Lee began to stymie the Pekin offense in the 2nd half as Pekin not only struggled to move the ball, but to stay set as the Panthers totaled 17 penalties for 120 yards. Central Lee at one point held a 25-14 before Pekin punched in a one-yard touchdown by Cael Baker to bring it within three after the two-point conversion. Central Lee responded with a 15-yard touchdown pass on the ensuing drive from Steucker to Kade Mahyr.

The Hawks led the Panthers by a score of 31-22 with a little over seven minutes remaining in the ball game. Pekin put together a solid, four-minute drive that was capped off by a 10-yard touchdown run by Mason Juhl, which made it a two-point ball game. Panthers head coach Brent Blakely decided it was now or never and gambled on the onside kick, and the gamble played off as Pekin recovered.

Blakely decided to feed his fullback again on the penultimate drive as Juhl, who’s 163 yards rushing was second for Pekin behind Michael Jones 212 yards, punched in the go-ahead touchdown with a 1:30 left. Pekin’s defense would bend on the final drive, as Central Lee got the ball down to the one-yard line. Pekin’s front decided it would get no further as they stoned Hawks running back Jaedon Bekter short of the goal line to preserve a 37-31 Panther victory.

The 1-0 Panthers will return to Pekin next Friday and host Belle Plaine, who lost 20-0 to Lisbon on Thursday night.