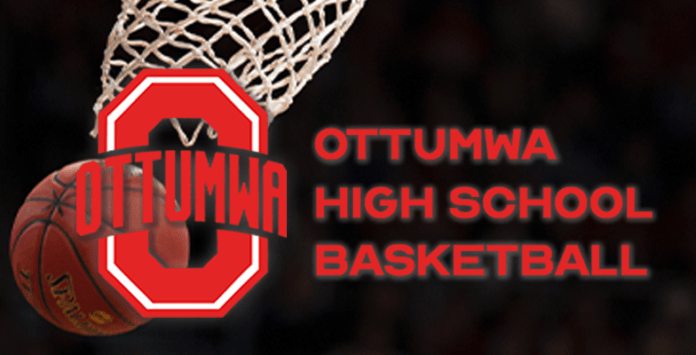 Ottumwa’s basketball programs faced very tough tests in the first doubleheader of the season. Both the Bulldog girls and boys had solid individual performances, but were unable to best a pair of ranked teams from Ames.

The OHS boys, playing without all-state performer Trae Swartz, fell to #6 Ames 64-47. Despite missing one of the top scorers in the state, Ottumwa kept the game a lot closer than the final score would indicate. The Bulldogs led the Little Cyclones 11-6 after the first quarter. OHS trailed by 13 at halftime, a product of committing far too many turnovers in the second quarter, but cut that deficit all the way to four by late in the third quarter. Ames wasn’t able to pull away for good until the final quarter.

Gatlin Menninga did his part to keep Ottumwa in the game, scoring a career-high 21 points. His 11 points in the third quarter alone allowed the Bulldogs to almost completely wipe out their halftime deficit. Joe Hammer chipped in eight points and Matt Graeve added seven for OHS. Ames’ Tamin Lipsey, the highest-ranked junior in the state in terms of college recruiting, led the Little Cyclones with 23 points. Keyshaun Brooks totaled 16 for Ames and Corey Phillips added ten.

The Ottumwa girls briefly held a 3-1 lead over #11 Ames, but the Little Cyclones ended the first quarter on a 16-2 run, and ended up winning by a final of 64-25. As was the case in the boys game, OHS struggled with turnovers, which allowed Ames to score a series of fast-break baskets.

Senior Isabelle Mellin came off the bench to pace the Bulldogs, scoring a career-high 12 points. The Ames roster boasts two seniors who have signed to play Division I basketball in college, and they led the Little Cyclones as expected. Ashley Iiams, a Drake recruit, led all scorers with 23 points, while Caroline Waite, a Bradley commit, added 21 points.

Both Ottumwa teams are back in action tonight, hitting the road to take on Grinnell.