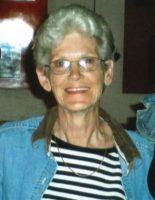 Norma was born on January 3, 1938, the daughter of Floyd and Ruby (Lunsford) Smith.  Following high school graduation, she continued her education at Indian Hills Community College, earning her LPN.

Norma was employed as a nurse at St. Joseph’s Hospital in Centerville for many years, before retiring in 2002, the same year that Joe passed away.  She enjoyed going to auctions and antiquing. Most importantly, she treasured every moment she spent with her family.

Funeral services will be held at 11:00AM, Saturday, February 1, 2020 at Lange Funeral Home and Crematory in Centerville with Pastor Dick Allen officiating.  Burial will follow the service at Oakland Cemetery in Centerville, Iowa.  A Visitation will take place, Saturday, February 1, 2020 at Lange Funeral Home, with the family greeting friends from 9:00AM-11:00AM.  Memorials have been established to EveryStep Hospice, and may be dropped off or mailed to Lange Funeral Home and Crematory, C/O Cicco Family, 1900 South 18th Street, Centerville, Iowa 52544. Condolences may be shared online at www.langefh.com.