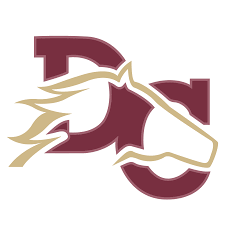 (Written by Chris Jackson) A 3-run double by Macy Hill in the bottom of the 6th propelled the Lady Mustangs to their 9th
consecutive victory and cemented their spot atop the South Central Conference standings. The Lady
Mustangs defeated the Knoxville Panthers by a score of 10-7.

What was expected to be a low-scoring tight game ended up being a see-saw affair. Knoxville
started the scoring as a 2-run home run by Ashlyn Finarty and put Knoxville up 2-0 after just ½ of an inning.
Knoxville added to their lead in the top of the 3 rd as they were able to push 3 more runs across the plate
to lead 5-0. In the bottom of the 3rd, the Lady Mustangs had an answer. The Lady Mustangs quickly got 2
outs in the 3 rd and then 3 consecutive singles by Cadan Van Laningham, Madeline Barker, and Briley
Lough started the rally for the Lady Mustangs. All 3 of those runners scored in the inning to cut the
deficit to 5-3. After a Knoxville pitching change to start the 4th inning, the Davis County offense came to
life once again. Macy Hill led off the bottom of the 4th with and single. She was able to jog around the
bases as Sophia Young hit her 2nd 2-run home run in as many days to tie the ball game at 5. 2 batters
later, Madeline Barker hit her 3 rd home run of the season to put the Lady Mustangs in front 6-5.
Knoxville wasn’t done yet, as they plated 2 runs in the top of the 5th to take a 7-6 lead in a steady
rain that had started to fall. In the bottom of the 5th, Sydney Henderson led off with a single and was
eventually driven in on a base hit by Cadan Van Laningham and a 7-7 ballgame going into the final two
innings. Knoxville went down 1-2-3 in the top of the 6th, and the Lady Mustang offense saved the best
for last. Davis County took advantage of errors by the Knoxville defense to load the bases with nobody
out. Knoxville pitcher Jadyn Strigle struck out the next two Lady Mustang hitters, leading to the heroics
of Macy Hill. Hill drove the first pitch of her at-bat to right-center field, just past the outstretched glove
of the right fielder for a bases-clearing double and a 10-7 lead. Barker was able to get the final 3 out of
the ballgame with the help of her defense and the Lady Mustangs completed the come-from-behind
victory.