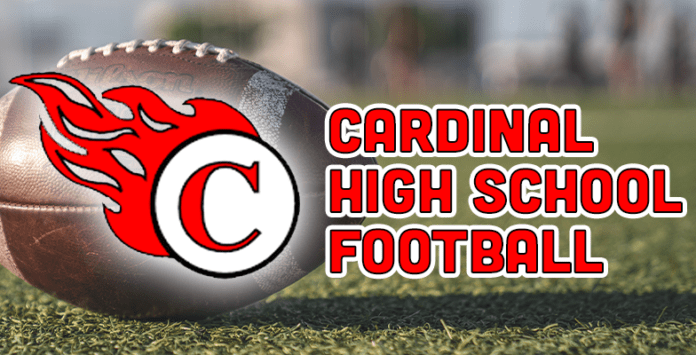 SIGOURNEY, IA – The best Cardinal Comet football season in years concluded Friday night at the hands of the traditional power Sigourney-Keota Cobras, 49-0, on a cold and windy October night. Special teams, the oft overlooked third phase of the game, proved to be the difference in the second quarter, as the punt team of the Comets was unable to block or cover the Sigourney-Keota punt return team, leading to big returns and blocked punts by the Cobras.

Cardinal hung with the traditional powerhouse throughout the first quarter, trailing just 7-0 at the end of the opening 12 minutes, but then the floodgates opened, and the 1A-6 district champions proved why they are ranked top five in the state. A 28-point second quarter put the game away, and Sigourney-Keota cruised to a decisive win to move on to the third round of the state playoffs. The Cobras will remain at home next Friday night to take on Beckman Catholic, Dyersville (6-2, 5-1, 1A-5).

A highly prolific Comets offense met their match against a very stout Cobra defense. Junior quarterback Maddux Jones was unable to find his receivers with the coverage and pressure applied by the Sigourney-Keota front. The big plays Cardinal’s offense relied upon all season long were not available in this contest, as the longest play from scrimmage of the night went for just 18 yards.

The Comet defense was put in tough situations all night long as well. Time after time, the Cobra offense had a short field because of the special team errors. The strong Sigourney-Keota rushing attack proved to be tough to stop, led by Sam Sieren’s 5-touchdown night.

Despite the shutout loss to end the year, Cardinal will look to use this season as another building block for the football program. Head Coach
Landon Miller, his staff, and most of the team will be strolling the sidelines next fall looking to top the five-win campaign this year. They will also have to adjust to shouldering higher expectations, something this team has not had to deal with in recent years.