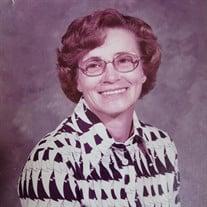 Mary Smith, 94, of rural Oskaloosa, died Friday, May 13, 2022, at the Oskaloosa Care Center in Oskaloosa. She was born December 20, 1927, in Bloomfield, Iowa the daughter of Harry and Hazel (Feagins) Greeno. She attended What Cheer High School, graduating with the Class of 1944. On December 24, 1945, she was united in marriage to Elmer Smith at the First Christian Church in Oskaloosa.

After high school, she went to work for What Cheer Pottery. Following her marriage to Elmer, she stayed home to care for her family and her home. She later took a job at the Continental Overall Factory for a time before going to work at Oskaloosa Food Products. Last she worked at Pella Corp. and remained there until retiring in 1989, after 16 years of service. Mary was a member of the What Cheer Christian Church. She enjoyed gardening, working in her yard, pulling weeds and raking leaves. She also enjoyed attending her family’s activities. Above all else, her family was the center of her world.