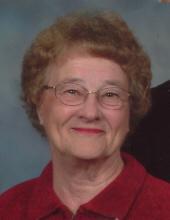 She was born May 17, 1935 in Rock Valley, IA to Alphonse and Marcella Schilmoeller Bennier. Mary married Richard Louis Heinrichs on October 4, 1954 at St. Augustine Catholic Church in Halbur, IA.

A graduate of St. Angela Academy in Carroll, IA, she had worked 17 years for Wapello County Farm Service Agency and for 5 years for Al Martin Real Estate & Auction Co.

Mary especially enjoyed being with her family and friends.

She was preceded in death by her parents; a granddaughter, Sara Beth Heinrichs; brothers, Robert, Kenneth, Paul, and James Bennier; and a sister, Carol Kurilla.

Limited open visitation will be from 11 a.m. to 4 p.m. Thursday, September 3rd at Reece Funeral Home. Online condolences may be left for the family at www.rfh-ia.com.

Funeral Mass will be 10 a.m. Friday at St. Patrick Catholic Church with Father Patrick Hilgendorf officiating. Burial will be in Memorial Lawn Cemetery. Those attending need to be prepared to follow the policies stated by the Davenport Diocese which include wearing a face mask while in the church building.

Memorials may be made to St. Patrick Catholic Church.