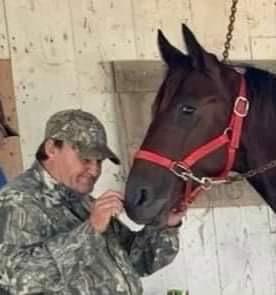 Marvin Leonard Saner, 61, of Eldon, IA passed away on February 1, 2022, at his home. As were his wishes his body had been cremated. A celebration of Marvin’s life will be held on Wednesday, June 15, 2022, Sat the Eldon Fairgrounds following the harness races. Memorial contributions in his honor may be directed to the family and mailed to 12947 Eagle Dr., Douds, IA 52551. Friends may leave online condolences at www.cranstonfamilyfuneralhome.com.

Marvin Leonard Saner was born on June 27, 1960, to Donald and Julia Liles Saner. He attended school in Van Buren County and began his love for harness racing at an early age. Marvin loved horses and everything that went in to training and racing. He spent many years in the harness racing circuit as a trainer, driver, and spectator. Marvin worked at FALCO in Fairfield for many years before taking early retirement. Eldon was always his home. He loved fishing, hunting, and attending a good fish fry. He will be missed by his family and his many friends.

Marvin was preceded in death by his parents and five siblings, Ronald, Tammy, Barb, Clifford, and Roger.