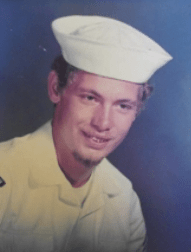 He was born October 3, 1952 in Ottumwa, the son of Gerald O’Dell Grubbs and Ferne Evlan Wilford.

A graduate of Ottumwa High School where he ran track, Mark served in the US Navy during the Vietnam War aboard the USS Theodore E. Chandler. He worked for Hormel in Ottumwa and drove over the road for Heartland Express for 10 years. He then worked for Coca Cola before attending Indian Hills Community College, earning his machinist degree. He then worked for Red Rock Rubber, retiring in 2019.

Mark enjoyed attending the Eddyville Dragway and was a NASCAR and football fan, especially the Green Bay Packers. He enjoyed watching movies and listening to vinyl records. Mark loved all animals and especially loved spending time with his family.

He was preceded in death by his parents; a brother, Dave Stevens; and his best friend, Larry Bleything of Ottumwa, who died in the Vietnam War.

His body has been donated to the University of Iowa Department of Anatomy.

Military honors will be conducted by Walter B. Schafer Post #775 Veterans of Foreign Wars and O.B. Nelson Post #3 American Legion at 4 p.m. Friday, February 4th at Reece Funeral Home followed by a time for friends to greet family until 6 p.m. Friday at the funeral home.

Inurnment will be in the Iowa Veterans Cemetery in Van Meter at a later date.