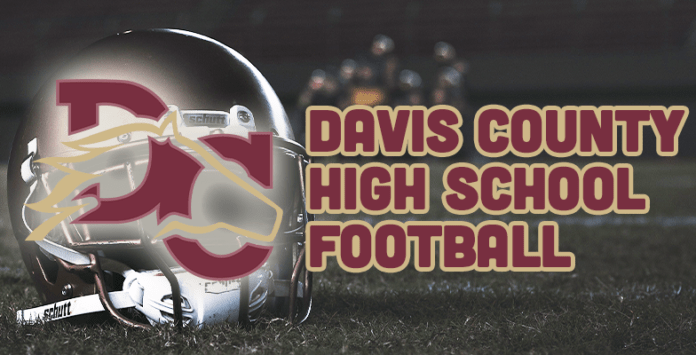 Davis County overcame an early 14-0 deficit and used a strong second half to defeat Albia 38-27 Friday night at Mustang Stadium.

Albia took advantage of a fumble on Davis County’s first drive and on their first play from scrimmage, Albia senior running back Nathaniel Wynn weaved his way through the Mustang defense for a 49-yard touchdown.

After a Davis County punt, the Blue Demons hit another big play, a 48-yard pass from senior quarterback Blake Chance to Wynn, to get inside the five yard line. Chance later hit sophomore CJ Flattery for a 2-yard score.

Trailing 14-0, Davis County got on track when junior quarterback Carson Maeder connected with junior wide out Caedyn Glosser for a 78-yard touchdown to get the Mustangs on the board. The ensuing extra point was missed but after Albia went three and out, Maeder hit Glosser from 44 yards out for another score. The two point conversion was no good and the Mustangs still trailed 14-12 at the end of the first quarter.

Albia went on a 9-play 73-yard drive to stretch out their lead. Chance found his favorite target, senior tight end Blake Stewart, down the middle of the field for 25 yards for the touchdown. The extra point was missed but Albia held a 20-12 lead.

Maeder hit Glosser again on Davis County’s next drive. A 33-yard connection set the Mustangs up on the Albia 8 yard line. Maeder then found Glosser in the the end zone for the pair’s third touchdown of the evening. A successful two-point conversion tied the score at 20.

Maeder continued his big night in the second half. Senior wide receiver Carson Zeitler, who has been playing limited snaps due to an injury, raced free through the Albia secondary. 49 yards later, Maeder had his fourth touchdown pass of the game and the Mustangs led 26-20.

After an Albia three-and-out, Davis County extended their lead on a drive that featured big runs of 18 and 24 yards by junior running back Gavin McCall. Maeder finished off the drive with a quarterback sneak from a yard out and the Mustangs enjoyed their biggest lead of the game, 32-20.

Albia struck back quickly before the end of the third quarter. Taking advantage of a short field, the Blue Demons traveled 31 yards in just three plays, the last of which was a 24-yard touchdown pass from Chance to senior wide out Nick Heffron. The extra point made it 32-27 heading into the fourth quarter.

Another big run by McCall (31 yards) was the big play of a drive that ended with another one yard touchdown run by Maeder to make it 38-27.

Albia’s last drive ended with the Blue Demons turning the ball over on downs. The Mustangs ran out the clock and then celebrated a 2-0 start to the season, their first such start since the 2012 campaign.

Davis County hosts the #2 ranked team in Class 2A Williamsburg (2-0) next Friday. Kickoff is scheduled for 7:30 PM.