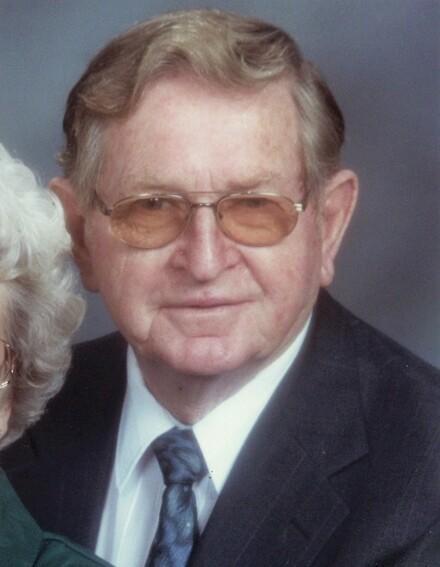 Lynn was born on September 13, 1927 in Plano, Iowa, the son of Lora and Velma (Staggs) Fenton.  Lynn grew up with the strong influence of his mother and aunt, finding a relationship with Christ at a young age.  As a young boy, he began feeling like he didn’t fit in with other children.  At seven years old, he had to start wearing glasses and couldn’t play athletics.  He had an episode of Rheumatic fever, which left him with heart concerns and from then on, he began living a life with a higher level of caution.  He attended Centerville Schools through his freshman year, and then his parents made the decision to move him to the Moravia School district, where he finally felt accepted for who he was.  Then, is when he met the love of his life, Lillian.  Her father was very strict, and wouldn’t allow her to see any young males or participate in any activities.  Her father knew Lynn’s sister and approved of her so much that he allowed Lillian to see Lynn.

On May 12, 1950, what seemed like an ordinary day to most, was a very exciting day for Lynn and Lillian.  After Lillian got off work, Lynn picked her up and drove near Fort Dodge to get married, mailing a card for her parents telling them that they were eloping- which was not how her parents envisioned her wedding to be, but it was what the couple wanted at the time.  Her parents were upset, but their love for Lillian and Lynn overcame that feeling quickly.  Lynn was united in marriage to Mary Lillian Tomlin in Vincent, Iowa at the Methodist Church, and to this union, four children were born, Lonnie, Linda, Ronnie and Diana.  The couple spent five days driving through Minnesota, Canada, North Dakota, western South Dakota and down through the Continental Divide, Rocky Mountains, Jackson Hole, Nebraska and finally back to Iowa where they made their home.  The first and second houses they lived in had no running water and had an outside toilet.  While in the second house, Lynn’s parents helped them buy 80 acres, 5 miles west of Centerville close to Lillian’s family.  Their first house in Centerville, Lillian and a friend of theirs bought at an auction.  They remodeled it and lived there for 2 years until they bought a house that someone had started to build and didn’t finish.  The couple fixed up the house, and moved two more times before they found their forever home.

Lynn grew up farming and learned carpentry work under the guidance of his father and uncle.    He had the opportunity to work with one of the first self-propelled custom combines, doing custom jobs for people until it phased out.  He made the decision to quit farming, realizing his true passion was Carpentry. He began working as a carpenter after high school and continued throughout his life, helping complete many buildings and repairs in the area.  Lynn also worked for Rathbun Rural Water in the 1970’s for a period of time.  For several years, he loved volunteering at Camp Appanoose. He enjoyed staying busy, and was very good at finding his grandchildren salvaged cars when they became old enough to drive.  Later in life, Lynn worked closely with the Amish, driving them where they needed to go. Lynn enjoyed spending time with Lillian and doing things for her- including building her flower garden.  He was also a member of the Albia Baptist Temple.