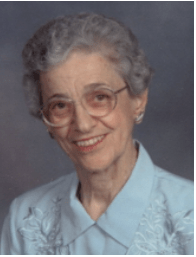 She was born May 8, 1924 in Brooklyn, NY to Samuel and Rosalie Maresca. Lucille married Donald Moriarty on November 8, 1969 at St. Aidan’s Catholic Church in East Williston, NY and he preceded her in death on February 8, 1997.

Lucille worked 28 years for New York Life Insurance Co. at the home office in New York City. She has been a resident of Ottumwa since 1969.

She was a member of St. Patrick Catholic Church, Altar and Rosary Fellowship, Catholic Daughters of the Americas, Hospice Serving Davis and Wapello Counties Auxiliary and volunteered for many years at Good Samaritan. Lucille had a love for beautiful music.

Surviving is her sister, Phyllis Cafiero; many nieces, nephews, great-nieces and great-nephews.

Mass of Christian Burial will be 10 a.m. Tuesday, April 12th at St. Patrick Catholic Church with Father Patrick Hilgendorf presiding. For those unable to attend, the service may be viewed on the Reece Funeral Home Facebook page. Burial will be in Calvary Cemetery.

In lieu of flowers, memorials may be made to St. Patrick Catholic Church.