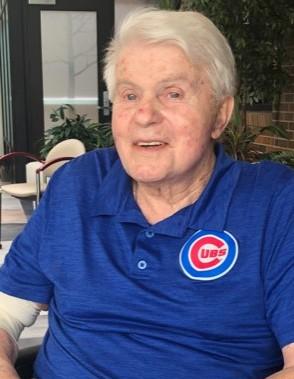 He entered the United States Air Force on December 30, 1949.  Louie served his country faithfully on the battlefield as a radioman during the Korean War, achieving the rank of Staff Sergeant.  For his bravery during wartime, he achieved numerous military combat awards, including the UN Service Medal, the Korean Service Medal, the Good Conduct Medal, the National Defense Service Medal, and the Distinguished Unit Citation.  Louie was honorably discharged on January 6, 1954.

Louie was united in marriage to Edith Daugherty on October 18, 1953 in Chicago, Illinois, and to this union of marriage, a daughter was born, Christa. The family resided in the Quad Cities for over 20 years.  The couple celebrated nearly sixty-one years of marriage until Edi’s passing on July 2, 2014.

A licensed master electrician, Louie was employed with Ametek for over twenty years, traveling throughout the United States and abroad troubleshooting jobs for the Troy/Laundrite Division.

Following his departure from Ametek, Louie returned to the Numa area and owned and operated his own business, Midwest Laundry Equipment Repair.  However, farming was his favorite job of them all.  He cherished the time spent on his acreage near Numa.

Throughout his lifetime, Louie was a member of numerous fraternal organizations, including the American Legion, Veterans of Foriegn Wars, Fraternal Order of the Eagles, and the Knights of Columbus.  Louie was a longtime member of  St. Mary’s Catholic Church in Centerville.

As a lifelong Chicago Cubs fan, he stayed up past his bedtime on November 02, 2016 to finally celebrate a CUBS World Series Championship!  He considered himself lucky and happy to have lived long enough to see them finally Win….

A Celebration of Life Service will be held at 10 AM, Thursday, July 23, 2020 at Lange Funeral Home and Crematory in Centerville with Father Timothy Armbruster officiating.  Military rites will follow the service at the funeral home.  A private burial will take place.  In lieu of flowers, a memorial has been established to the Alzheimer’s Association and may be mailed to Lange Funeral Home and Crematory, 1900 S. 18th St., Centerville, Iowa, 52544.  Condolences may be shared online at www.langefh.com.