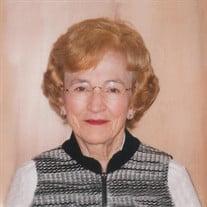 LaVerne Marion Molyneux, daughter of Edward and Pauline (Schweiner) Clark, was born May 6, 1924, in Kenosha, Wisconsin. Initially named LaGrange, her parents changed her name when she was three or four. The family moved to a farm near Lena, Wisconsin, when Laverne was a young child. Life was hard on the farm, and LaVerne was charged with looking after her young sister, Dorothy, and many other tasks. When she was old enough, she became a nanny to a family in Lena and began earning money that she saved for her future. On May 22, 1941, she graduated from Lena High School. While attending business college after high school, she continued to work to help her family and support her sister’s education. After completing her education, LaVerne was hired by National Cash Register. There, she met the love of her life, Donald Albert Molyneux, a young Amy Veteran who had recently retired. A few months later, they married in Racine, Wisconsin, on December 22, 1945. LaVerne was then hired by Gimbles Department Store as an executive secretary and worked there until her retirement.

LaVerne and Don were community-minded and participated in countless volunteer service projects in their community, The Village of Thiensville. She was a member of Eastern Star and the Methodist Church. She and Don traveled much; some of their favorite destinations were Hawaii, Hollard, Figi, and Italy, where they spent Christmas Eve at the Vatican. She and Don loved golf, attending Green Bay Packer and Wisconsin Badger Football games, and entertaining in their home. Their all-time favorite activity was dancing – they even installed a dance floor in their basement. LaVerne also loved decorating her home for Christmas, collecting teddy bears, and doing crafts. In September 2019, Don and LaVerne moved to Oskaloosa to be closer to family.

In addition to Don and her parents, LaVerne was preceded in death by her sister, Dorothy Marie Clark Gribben.

Memories of a Niece
LaVerne was born to Pauline (Schweiner) and Edward Clark in Kenosha, WI. She was originally named LaGrange Marion Clark, however her mother changed her name around the time she was three or four years old. I’m not sure why or for what reason, or how LaVerne felt about it.

LaVerne was the oldest daughter and looked after her sister Dorothy. Sometime during the Depression when she was young, I don’t know the exact year, her mother bought the family farm from her uncle and they all moved to Lena, WI where they became a farming family. The farm would have been lost to foreclosure had her family not purchased it. It was around the time her mother was pregnant with her brother. Her mother lost the baby and became very ill, and LaVerne was actually sick for some time as well. While her mother was in the hospital, LaVerne was hidden at the home in Kenosha while her father and Dorothy went up north to prepare the farm for LaVerne and Pauline to join. Whatever illness LaVerne had, they had to hide from the health department or LaVerne would have been taken from them and quarantined. LaVerne recovered and joined her mother and they moved to the farm.

Life on the farm was difficult. They walked to school to save money on gas and many times couldn’t attend church because it was too far to walk and the truck could only be used if absolutely necessary. They were Czech-Irish in an area of German and Polish immigrants and that had its own issues at the time. LaVerne’s mother struggled with the adjustment from city life to country life, and much of the work fell to LaVerne. LaVerne was the responsible one and at one point had to put up with Dorothy and father bringing a foal into the summer kitchen to live (who continued to think it was welcome as a full grown horse years later). When she was old enough, she became a nanny to a family in Lena and began earning money that she set aside for her future as well as to help get her family ahead. She graduated from Lena High School on May 22, 1941.

While attending college I know she worked to continue sending money back to the farm and to help set aside money to send Dorothy through beauty school. Prior to meeting Don, her boyfriend was in the navy and had to do recoveries from the ships in Pearl Harbor. She said that really impacted her and the man she was with who was never the same after. While she was working, she was introduced to Uncle Don, and the rest is history. It was important to her that Dorothy have independence and the skills to not have to rely on somebody else for her income. I know that when they both moved off the farm, they both chose a church and that was very important to them because they never really had that community growing up.

It was hard for LaVerne to talk about her early life. Her family struggled and that shaped her into the person she became. Even asking her the name of her grandparents when I was doing family history projects she would reply, “that’s just not something talked about.” To LaVerne, the family and life you built together and the community you lived in was most important. At least from my perspective when she talked, that’s what she valued. She built that life with Don, and it’s so hard to even think of them as anything but a pair.

When we spoke and talked of her life with Don, travel, dancing, Eastern Star, the Masons, and so many other organizations meant the world to her. Some of her favorite trips were the time they spent Christmas Eve Mass at the Vatican, when she got a hole in one in Fiji, stepping off the plane in Amsterdam and seeing all the tulips, and sleeping in hammocks over the ocean in Hawaii before it was a built up tourist destination. When my grandma was alive, LaVerne would many times bring things back from these trips for us grandkids and it was always exciting to hear about the amazing places she had been and the things she had seen. She liked the way it felt to drive fast and self described herself as having a bit of a lead foot and said she was always lucky the thiensville police knew who she was. It was important to her to have her hair and nails done and always be looking nice.