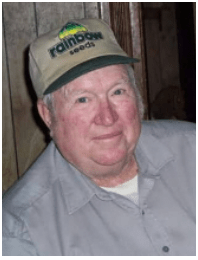 He was born on October 13, 1934 in Fremont, IA to Lewis and Lucille Crile DeWitt. Kenneth lived all his life within 50 miles from his birthplace. Kenneth married Yvonne May Poe on January 21, 1956 and they lived in Blakesburg all of their married life.
To this union, seven children were born, Daniel of Ottumwa, Karen (David) Fugate of Downing, MO, Sharon (John) Nelson of Ottumwa, Jeffrey (deceased), Penny (Sam) Fisher of Blakesburg, Troy (Tammy) of Ottumwa and Todd (Theresa) of Blakesburg; 22 grandchildren; 25 great-grandchildren.

Kenneth was a fertilizer-chemical dealer for 20 years and he sold seed corn and beans for 30 years. He loved living the farm life and farming his land and helping others. He raised hogs, cattle and crops of hay, corn and soybeans.

Kenneth loved traveling, whether it be to the neighbors to play cards on a weekend, flying on trips or driving to Branson for a vacation, it was always relaxing. He also enjoyed going to Gospel music events around the area. He loved hunting as a teenager and enjoyed it more when he could do it with his sons. His favorite pastime was fishing anytime he could. Once he retired that was a daily event!
He was a Blakesburg school board member of 12 years during the times his children were in school. He was active in FFA and 4-H during all the years his children were involved. He was on the Sunset Manor board, Blakesburg Volunteer Fire Department board and served several offices at the Blakesburg United Methodist Church. He was also a trustee for the Adams Township for 12 years. He was a Lions Club member for over 45 years, since 1973 and served as a past president and also received the Warren Coleman Award.
In his younger years, he bowled for 27 years, both on a men’s league and a couple’s league with his wife. Kenneth loved to grill and have his family and friends over for many get togethers at his place.

His faith has always been in God. God has always been the head of his life and home. He and his wife raised their children taking them to church weekly and it was always enjoyable to eat with parents after and relax on Sundays.

Kenneth has one living brother, Carroll (InYong) DeWitt of Olympia, WA; a niece and two nephews.

Funeral services will be 10 a.m. Monday, May 16th at Reece Funeral Home with Pastor Ray Lyon officiating. For those unable to attend, the service may be viewed live on the Reece Funeral Home Facebook page. Burial will be in the Blakesburg Cemetery.