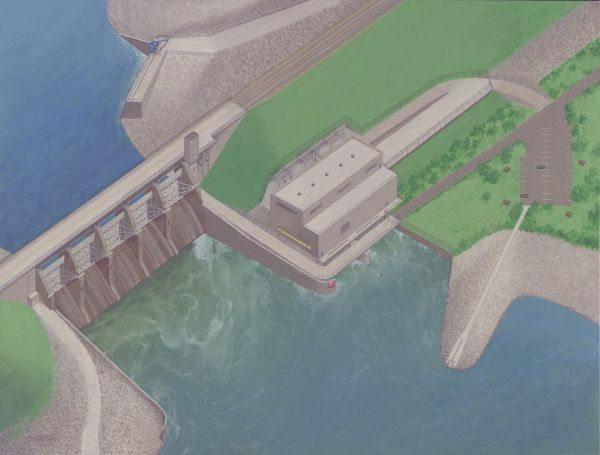 “If anything, it’s going to help [generate] energy that wasn’t there before,” Missouri River Energy Services employee Verne Cochran says of the hydroelectric power plant project at the Red Rock Dam near Pella.

Missouri River Energy Sources (MRES) is a non-profit organization that operates in the best interests of its communities throughout regions of Minnesota, North Dakota, South Dakota, and Iowa.

The energy generated by MRES’s many wind, gas, coal, and hydroelectric plants is most often used locally.

The hydroelectric project in MRES’s Pella community is expected to take anywhere from four to four-and-a-half years to complete.

Upon completion, the plant is expected to generate enough electricity (anywhere from 36.4 megawatts to 55 megawatts) to adequately power up to 18,000 homes, or all of Marion County, annually.

MRES first became involved with the project when it purchased a preliminary permit from Nelson Energy (a company that seeks out sites for potential hydroelectric plants to be constructed) for the Red Rock Dam area.

MRES developed the permit to fit the needs of its members and began construction in August of 2014.

The project was designed with heavy consideration for the US Army Corps of Engineers and its responsibility of monitoring and changing the water levels that flow from the dam daily.

MRES works closely with Corps supervisors daily to ensure that the approved plans are met and concerns are addressed during the construction process.

The MRES plant will have little to no effect on river levels downstream upon its completion.

Cochran notes that upon plant completion, communities downstream of the dam site will be virtually unaware that any changes to the Red Rock Dam’s outflow have been made at all.

In addition, the plant will have a strictly positive environmental impact on the Lake Red Rock area.

MRES members took special care to select turbines that are “fish friendly… [and will] help monitor oxygen levels in [the] water…[features] that [weren’t] there before”.

The project is now nearing its 2-year mark, and the Pella community has already begun to experience the economic and social benefits of the project.

From the hiring of local construction workers to the purchasing of local equipment and building materials to the employee-wide establishment of contemporary roots in Marion County, the project has really revitalized the area.

Upon completion, the plant will only require some 2 workers to keep up with equipment operations and maintenance.

MRES officials hope to offer tours and similar visitor services upon the project’s completion and the finalization of security measures and regulations.

MRES would like to thank the public for its patience and consideration during the transitory process.

Both Lake Red Rock’s North Tailwater Recreation Area and part of an existing bike trail are currently closed or removed due to the project, but MRES has added several park features for the public to enjoy during the final years of the project.

Features include a new trail head, fish cleaning station, playground equipment, and added miles of bike trail for the area to continue to enjoy for years to come.

For more information on the MRES hydropower plant project and its impact on the Lake Red Rock area, visit http://www.mrenergy.com/contents/hydroelectricity or http://redrockhydroproject.com.