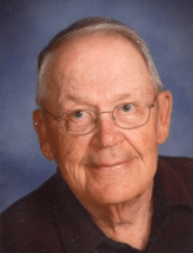 Ducky was a 1948 graduate of Ottumwa High School and a resident of Ottumwa all of his life. He was so proud of his hometown. His first job was at Olson’s Sporting Goods, and then he was a salesman in wholesale foods for Lagomarcino and Strawhackers, retiring in 1993.

Ducky was a member of Wesley United Methodist Church. He loved sports, golf, the city of Ottumwa and was a local supporter of Ottumwa sports and activities. His favorite hobby was spending time with his family and attending his grandkids sporting events. Ducky was a Hawkeye, Cubs, Ottumwa Bulldogs and Indian Hills fan.

He was preceded in death by his parents and a sister, Betty Ashby.

His body has been cremated. Visitation will be open at 10 a.m. Tuesday, December 7th, at Reece Funeral Home with the family present from 12-1 p.m. Tuesday.

Memorial services will be 1 p.m. Tuesday, December 7th, at Reece Funeral Home with Pastor Chris Childs officiating. For those unable to attend, the service may be viewed live on the Reece Funeral Home Facebook page. Inurnment will be in Ottumwa Cemetery.

A Celebration of Life will be held in April 2022 at his residence on Eleanor Drive in his “cave”.

In lieu of flowers, the family requests memorials be given to Ottumwa A-Club.