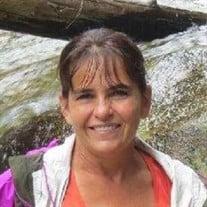 Heidi Jean Flowers, daughter of Larry Joe and Margaret Elizabeth (Rust) Mateer, was born on June 19, 1966, in Oskaloosa. She was raised near New Sharon and was a 1984 graduate of North Mahaska High School. She furthered her education at Indian Hills Community College, where she studied Computer Science. While her sons were young, she stayed home with them. When they went to school, she went to work at Vermeer Manufacturing; she started on the floor and was promoted to work in the engineering office, where she worked for several years. Later, Heidi was hired by Wieler Products in Knoxville; she was again promoted to the engineering department, where she designed and wrote operating and product supply manuals. She retired in December 2021.

Heidi’s love of the great outdoors began when she was a youngster. Her dad taught her to bow hunt as a young girl, and she continued to enjoy hunting her entire life. Kayaking and fishing were also some of her favorite activities. She also enjoyed both vegetable and flower gardening.

Heidi married John Flowers on April 23, 2016. They made their home on an acreage near Harvey, where Heidi enjoyed her many hobbies and the peace of the countryside.

As was her wish, Heidi’s body has been cremated. A celebration of her life gathering will be announced later. Her ashes will be inurned in Bellefountain Cemetery near Tracy, Iowa. Memorial contributions can be made to the Mahaska Health Hospice Serenity House. Langkamp Funeral Chapel & Crematory is handling her arrangements.