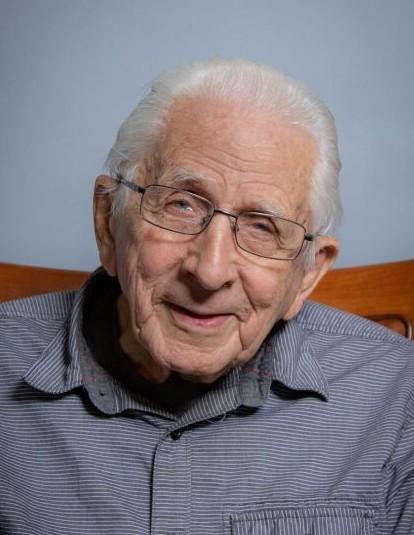 Gene was born on May 21, 1925 in Bloomfield, Iowa, the son of Lester and Ruby (Rees) Dixon.  Following graduation from Bloomfield High School, Gene enlisted into the United States Navy on September 5, 1943. He served on six different vessels/stations- NTS, Farragut, Idaho, NTTC Navy Pier in Chicago, Illinois, ATB, Camp Bradford in Norfolk, Virginia, NAT Ft. Pierce, FLA., 10th Beach Batt., and the USS Dutchess, which he crossed the pacific three times during World War II.  Gene faithfully served his country, and was honorably discharged as a Motor Machinist’s mate second class on April 19, 1946. In June 2017, the Iowa Court Reporters Association of Veteran History awarded Gene with a Certificate of Appreciation for his participation in the Veteran’s History Project and his dedicated service to the United States of America. They interviewed and recorded him and will be in Iowa’s Veteran’s History.

On October 8, 1950, Gene was united in marriage to Jeraldine Morlan at the Fairview Church of the Brethren in Unionville, Iowa.  To this union, three children were born, Lydia, Rick and Lisa.

After the military, Gene began working with his father in the family construction business. Gene enjoyed helping the extended family with carpenter projects. He remodeled their home on the farm, drew the plans and was very involved in building their new home.  He was employed with an appliance dealer in Bloomfield for a period of time, installing appliances and delivering bottled gas. In 1955, the family purchased a farm north of Moulton and Gene began farming while working at Union Carbide in Centerville and after 23 years at Carbide, he retired at the age of 62.

Gene helped build the Centerville Assembly of God church in Centerville. Gene and Jerri are the longest standing members of the church, and Gene was also a church trustee. Prior to attending Centerville Assembly of God, they attended Fairview Church of the Brethren where they created lifelong friends and close relationships. For Gene’s entire life, he had an unshakeable faith in God and a fervent devotion to his church.

Later in life, Gene discovered he had artistic talents, and painted many oil paintings which family and friends still treasure. Gene enjoyed working outdoors, mowing the lawn (up until he was 92) and helping Jerri with her flowers and gardens.

He also loved to travel and took many wonderful vacations with family, the grandkids, and friends. He was able to visit 49 states in all. He enjoyed going to visit his great grandkids as well.