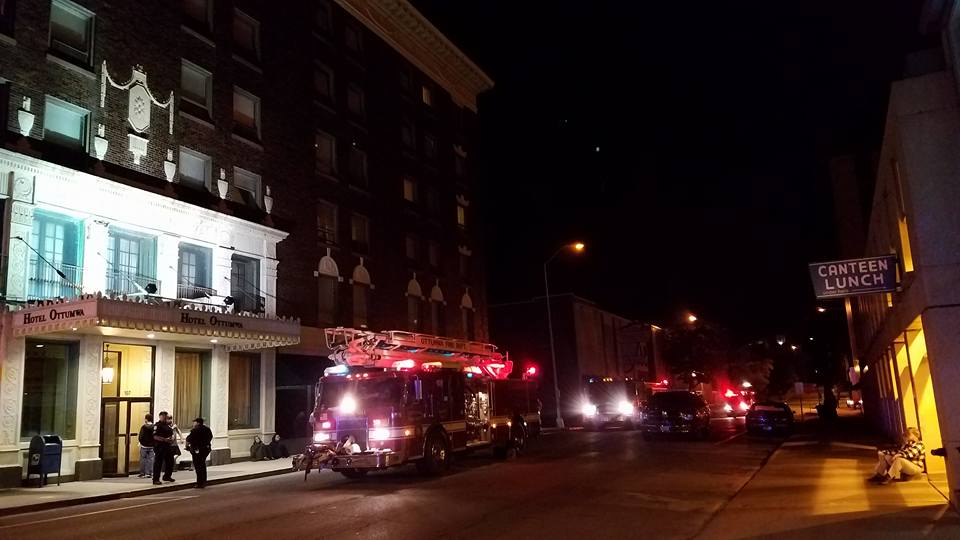 A fire at a nearly 100 year old downtown hotel sent one woman to the hospital early Sunday morning.

Witnesses say the fire started on the fourth floor of the six floor ‘Hotel Ottumwa’. It was contained to a single room according to Ottumwa Fire Chief Tony Miller.

“The sprinkler system did exactly what it was designed to do, it kept the fire contained until we got in to put it out,” Miller told Ottumwa Radio News.

Miller says the cause of the fire remains under investigation. He noted that crews would be looking into the fire more on Sunday and Monday.

One occupant of the room was transported to the Ottumwa Regional Health Center. She was later taken by helicopter to Iowa City where her condition and extent of injuries remains unknown. Authorities have not released her identity.

Miller says most of the damage to the hotel did not come from the fire. “Most of the smoke and fire damage was contained to just that room. There was water damage across the second, third and fourth floors. It even got down to the ground floor in a couple of places.”

Ottumwa Radio’s Derek Schlegel, a resident of Hotel Ottumwa, says he was awoken by smoke alarms shortly before 1 o’clock Sunday morning. He saw water coming through the ceiling of a third floor hallway, saw ceiling tiles falling, and smoke in the hallways.

Miller says that most guests were allowed back into their rooms. Schlegel reports that some of the displaced guests were given rooms at the nearby Americinn Hotel, which is owned by the same family as Hotel Ottumwa.

Ottumwa Fire Chief Tony Miller is scheduled to be the guest Monday morning on the KBIZ Dialogue Program.